When world-renowned French flautist Jean Pierre Rampal appeared on The Muppet Show during season five, it was a bit of a dilemma for Miss Piggy. She wanted guests to perform with of the appropriate classiness caliber and Rampal filled the bill there, but she knew her French language skills (or lack thereof) would be exposed. The two performed a duet of Henry Bishop’s “Lo, Hear The Gentle Lark” with little conversation, but in the end, Miss Piggy feigned laryngitis and was off the hook. Rampal, in the meantime, performed for an appreciative audience of birds. This was nice interlude, using the birds from the Electric Mayhem’s earlier “Rockin’ Robin” number. Jim loved bird characters, designing many of them, and for The Muppet Show pilot, he had conceived of a bit called “Birds in the Trees”. The Mayhem’s number had the band members sitting in a tree, recalling that earlier sketch. 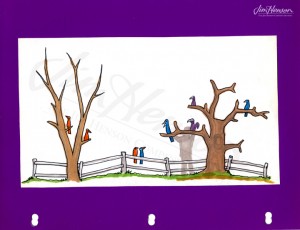 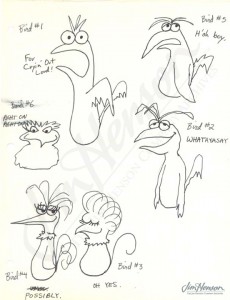 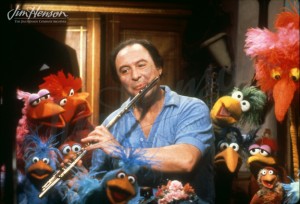 This entry was posted in 05-May '80, 1980, Muppet Show and tagged Electric Mayhem, Jean Pierre Rampal, Miss Piggy, The Muppet Show. Bookmark the permalink.