From the earliest seasons of the show, Sesame Street was recognized with numerous nominations and the characters became a regular part of the Emmy Awards show entertainment. Kermit and Cookie Monster presented awards for the 1972/1973 ceremony, Big Bird appeared in 1974, and in 1979, with the popularity of The Muppet Show, Kermit and Miss Piggy appeared, introducing the rules. Jim was an active member of the Academy of Television Arts and Sciences (having won his first Emmy back in 1959 and his first for Sesame Street in the 1970 season), and was called on to serve as a judge on several occasions.

While Jim was also busy making variety show appearances, television specials and developing his ideas for what would become The Muppet Show, much time in the early 1970s was devoted to all areas of Sesame Street. This included taping the show (which then meant 130 episodes per season), making record albums, doing live appearances, and consulting on the development of licensed products. This was growing to become an important source of revenue and outreach for Children’s Television Workshop with the Muppets front and center. Jim wanted to ensure that his characters were presented in a high quality, constructive way as toys, dolls and books so he was closely involved with the approval process on all Muppet products. Given his active involvement, it’s not surprising that he noted in his journal when Bill Whaley, long-time head of CTW’s licensing group, was hired. And Whaley was well aware of the importance of Jim’s characters to the success of his ventures. As he said at one point, “It’s the Muppets that sell.” 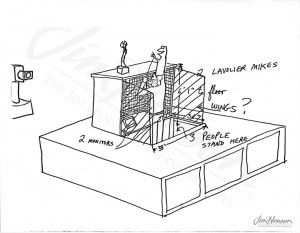 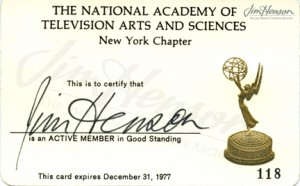 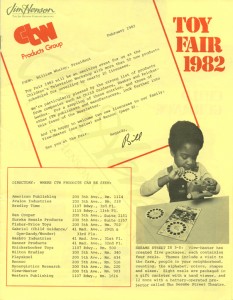 1982 Toy Fair brochure with a note from CTW’s Bill Whaley.