Every year, during the second week of April, the auto industry shows off its latest products at the Javits Center in New York City. As part of this grand convention in 1988, Chrysler unveiled the Muppet Traffic Safety Show, an animatronic extravaganza that would travel the country, taking up residence in shopping malls throughout the US. Featuring Kermit, Miss Piggy and the other Classic Muppets, this 50 x 43 foot set-up, according to the press kit, “…is a fun-filled musical ride around a miniature movie lot where The Muppets are filming Play It Safe – The Muppet Traffic Safety Movie. Along the way, all of your favorite characters…teach children important traffic safety lessons.” The ride, in custom made cars seating six children at a time, concluded with a short film recounting the safety lessons that were demonstrated. The show toured for about two years.

Back on October 21,1962, Jim and Jerry Juhl attended the National Auto Show to promote it for sponsor Reynolds Aluminum on NBC. Appearing on camera with Reynolds spokesman Rex Marshall, Kermit and Harry introduced the show. Later, in a conversation with his Muppet psychiatrist, Kermit discussed his delusions of grandeur and the doctor commented, using only the names of the new 1963 car models. Kermit talked about royal aspirations, and the doctor responded, “Imperial.” When Kermit suggested he go to Europe to be king, the doctor said, “Continental” and when Kermit suggested that, “I could wander around Europe looking for a country,” the doctor responded, “Rambler.” It went on for a while, and finally the doctor said, “Avanti.” Kermit was confused and asked, “Avanti what?” and the doctor answered, “Avanti finish this bit – I’ve run out of automobile names!”

There were several other bits, ending with Today Show host Hugh Downs introducing Jerry Juhl’s witch character, Taminella. At the Research Laboratory of Motivational Witchcraft, Tammy demonstrated how she, “…puts that something special into every new car,” by creating a witch’s brew of car parts which, naturally, exploded at the end. Clearly the program was a success – Jim received an appreciative letter from NBC that noted, “The way in which you managed to achieve our programming desires under the most trying circumstances was a distinct pleasure to watch. Your professional method of doing the job made my task much easier.”

The Chrysler project wasn’t the first time Jim was recruited to teach traffic safety. See one of his 1962 films made on behalf of the Council of Churches. 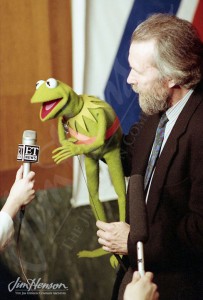 Jim and Kermit at the launch of the Muppet Traffic Safety Show, 1988. 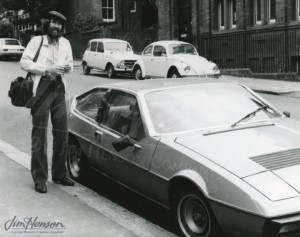 Jim standing next to his Kermit-green Lotus on a London Street about 1979.