By the fifth season of Sesame Street, the characters from the show were well known around the country and welcomed guests on the television networks. Ernie and Bert (Jim Henson and Frank Oz) did a bit on The Today Show with one of the regular hosts, Gene Shalit. The conceit was that Bert was joining the show as a new interviewer and Gene would give him some tips. They began with Ernie’s suggestion that Bert disguise himself so that he is not bothered on the street after the show. Ernie explained, “Look at Gene Shalit over there. You don’t think he really looks like that do you?” So, Bert added a Gene Shalit-like moustache and began to interview Ernie who was completely uncooperative. Ernie answered Gene’s questions charmingly, but wouldn’t answer more than “Yes” or “No” to Bert. Finally Bert quit in disgust.

Three years later, Shalit hosted a special featuring another Muppet dressed to look like him. According to the press materials, “Shalit is to host an adult ‘look’ at Sesame Street in a Festival ’77 special for PBS. The 30-minute special, Sesame Street at Night? takes its theme from a critic’s remark when TV’s most popular children’s series began eight years ago – ‘It’s too good for kids.’ The 1,000th hour of Sesame Street is to be broadcast on Friday, March 11.” 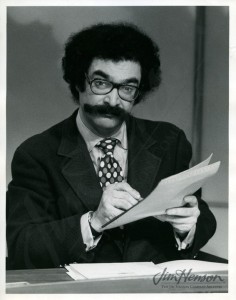 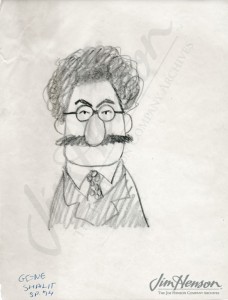 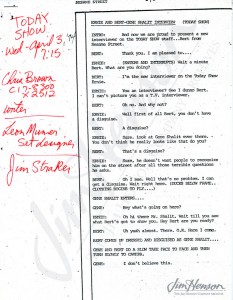 Jim’s script for the Today Show appearance with Bert as Gene Shalit. 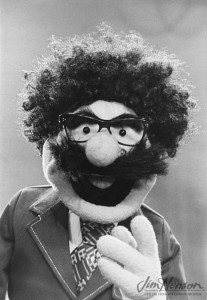 Another Gene Shalit Muppet for Sesame Street at Night?, 1977.