Centuries before television and long before the printing press, storytellers provided entertainment and were the depositories for a collective memory. In making his series, The Storyteller, Jim Henson wanted to be true to the verbal art of storytelling while using the visual medium of television to bring these timeless stories to life. He once explained, “We wanted to go back to the traditional way of telling fairy tales which is through a storyteller.” But he also wanted to create compelling images, using the latest technologies, to capture the visions conjured up by a practiced storyteller. A good storyteller suspends the present and propels the listener into another world. Jim’s extraordinary filmmaking and the innovations of his Creature Shop did just that.

Jim believed in the power of a good story and saw these tales, especially in their earliest versions, as compelling theater with continuing relevance. “I love these traditional fairy tales. I think they have a lot to say, and the stories have a lot of substance – they work for the present day,” he explained. Throughout his career, he used classic fairy tales as the inspiration for numerous projects, most in the form of humorous parodies. With the experience of his fantasy films under his belt, he now had the tools to take a more serious approach to these well-known tales. The Storyteller series was originally conceived by Jim Henson’s daughter Lisa after studying folklore and mythology at Harvard University. Jim was enchanted by the idea of a television series that remained true to the subtlety and metaphoric richness of ancient stories. He and Lisa brainstormed the concept of the series, basing all of the episodes on authentic folk tales. The result of a strong literary research team joined with the magical visual effects and animatronics produced by Jim Henson’s Creature Shop, The Storyteller is a rare combination of ancient tradition and modern technological artistry.

Jim Henson brought together an extraordinarily talented group of collaborators to create the series which aired as specials in 1987 and 1988 and then as part of The Jim Henson Hour in 1989. Something of a family affair, Jim’s son Brian performed the Storyteller’s dog. The show’s writer, Anthony Minghella, went on to win an Academy Award for his work on the film, The English Patient, as did The Storyteller composer, Rachel Portman. The BAFTA award winning costumes for the series were created by Ann Hollowood and Emmy Award winner Polly Smith. Fraggle Rock producer Duncan Kenworthy went on to produce the film Four Weddings and A Funeral after his work on The Storyteller. And, of course, the Storyteller himself, John Hurt, is internationally acclaimed for his work on both the stage and screen.

Jim directed two episodes and brought in several young directors, some with experience in making music videos, for the other seven episodes. Having his pick of Anthony Minghella’s sensitive and engaging scripts, Jim chose to direct “The Soldier and Death,” based on a Russian story about a soldier who cheats death and “The Heartless Giant,” the story about a Giant and a prince grappling with friendship and betrayal.

Learn about the “A Story Short” episode of The Storyteller.

Learn about how the puppeteers were hired for The Storyteller and other UK productions.

Get a glimpse behind the scenes of The Storyteller. 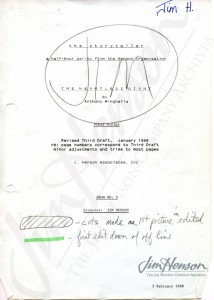 Title page from Jim’s directing script for The Heartless Giant. 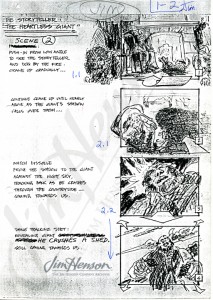 Storyboard page from The Heartless Giant with Jim’s annotations. 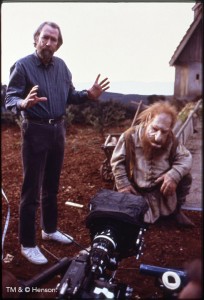 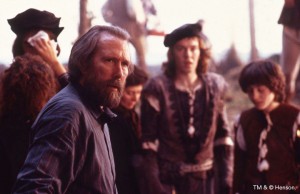