Jim was pleased to lend his characters to causes he felt were worthy. This resulted in public appearances and public service announcements for organizations ranging from The National Wildlife Federation and the University of Maryland, to The Better World Society and Ronald McDonald House. In March 1984, Henson Associates was invited to participate in the Children’s Royal Variety Performance which benefited the U.K. based National Society For The Prevention Of Cruelty To Children (NSPCC). With Fraggle Rock newly on the air, it made sense to feature the show. Fulton McKay, who played the lighthouse captain on the English version of Fraggle Rock, and his puppet dog Sprocket, performed for this show along with David Barclay, Brian Henson, Mak Wilson and Ian Thorn, who did a short routine. An edited version was later televised.

The following June, as part of the NSPCC Centenary Celebrations, the Fraggles were asked to participate. Jim was happy to oblige and provided hundreds of Fraggle licensed products as prizes and the live appearance of two costumed Fraggle characters. The 40,000 (or so) guests had a wonderful time.

In 1988, Jim once again helped raise awareness and funding for the NSPCC. Kermit performed his ballad, Bein’ Green on the Children’s Royal Variety Performance which again benefitted the NSPCC and aired on the BBC. Statler and Waldorf also appeared, probably asking if making an audience watch the Muppets constituted cruelty to children. Apparently not, as the Muppets were invited to appear a third time on the Children’s Royal Variety Performance in 1993. 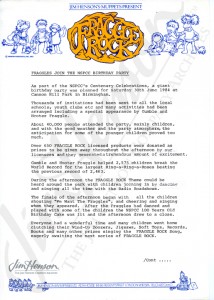 Press release about the Fraggle Rock participation in the National Society for the Prevention of Cruelty to Children event, 1984.