Jim made an effort to share in his team’s personal celebrations and attended the wedding of puppet builder Rollie Krewson and her husband Art Almeida in 1983. Rollie continues to create magical characters (including Abby Kadabby) in the Henson workshop after almost forty years. She recently shared her reminiscences of her first years in the workshop.

I first met Jim in October 1973 when I was an intern from Denison University in Ohio. I interviewed with Diana Birkenfield and Bonnie Erickson and became the very first workshop intern. And I loved it. From Don Sahlin’s practical jokes, Caroly Wilcox’s fresh pesto lunches and Dave Goelz’s “Muppets 101” lessons – I couldn’t have been happier.

Jim usually came by the shop daily in the early ‘70s – before The Muppet Show claimed him. He was always happy to see everyone and very “dad-like” to me. He knew I was not a city girl, so he was always concerned that I was okay. He even lent me his car when I had to move from Manhattan to Brooklyn. I still have the note he wrote me when I returned as an employee after my internship ended and I graduated from college.

The first puppet I built was a Koozie pup [from the planet Koozebane] under Dave Goelz’s tutelage. The next full puppets were Stalks and Heaps for The Muppet Show: Sex and Violence. Boy, was I scared when Jim first came to see them. I didn’t know what to expect. As it turned out, he loved the heaps, but the stalks needed some finessing. Gradually, over several years, I became quite adept at interpreting Jim’s “doodles.” Always such a visual person, he knew exactly what he wanted when he saw it, but his doodles always offered many options to his puppet builders.

When I married in 1983, I was so lucky to have my two dads at my wedding — my own father, Jack Krewson, and Jim, my New York dad. Jane and Heather Henson were also able to attend. It truly was a day I will ALWAYS remember. 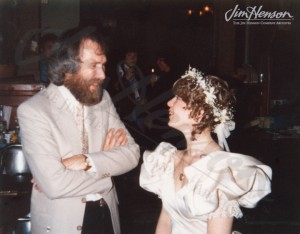 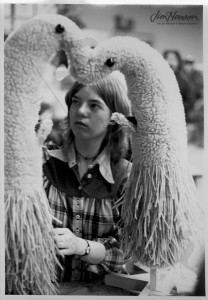 Rollie Krewson in the workshop, 1970s.