Michael K. Frith, Henson art director extraordinaire and the creative force behind the Muppet art parodies known collectively as the Kermitage Collection, reminisced recently about the project and the 1986 fundraiser for the Graham-Windham children’s charity:

When I joined The Muppets in 1975, I had come from Random House, where, as the editor/art director of Sesame Street projects, I’d produced a series of calendars featuring the Sesame Street characters. At that time the now ubiquitous celebrity calendar (and character calendar, and almost anything but the folksy kitchen calendar) was almost unknown in bookstores; these things really were unique. And enormous fun to do.

The Pig had not yet had her breakout moment by that next year, but there was something about her… And so, as the newly minted Head of Art and Design at Muppets, I began to explore her in ways that only print can do, as glamorous icon of page and poster – and the first great star of the celebrity calendar. I couldn’t resist dressing her in lame’ and lace, sprawling her on silken sheets and bearskin rugs, casting her in space epics and bodice rippers. And photographing her like a movie star!

And so her “alternate persona” was born, and for year after year I had the joy of reinventing her again and again in fantasy after fantasy, aided and abetted by the most extraordinary team of costumers, set builders, lighting experts and photographers that ever shot a willingly armatured, T-pinned and gaffer-taped rubber pig. She happily suffered for her art.

In the course of it all, I twice placed her in settings derived from the fine arts, a sort of generic Fragonard and the now classic “Mona Piggy.” There was something irresistible about this, and I began, in the rare spare moments the photo studio had, devising absurdly elaborate – and not inexpensive – recreations of iconic works of art starring our (by now) much loved Muppet repertory company. I was determined to accomplish a couple of things, but most importantly to capture both the light and the composition of the originals (not easy when you’re putting a short, dumpy pig in the place of a long, lissome Botticelli Venus), and to do it ALL in the camera – no tricks, no retouching. This, my dears, was pre-Photoshop. We had integrity then. And we were a little bit mad. Maybe more than a little.

Slowly the portfolio grew, and there came the question of what to do with it. I DIDN’T want to do just another calendar – by then “novelty” calendars were a glut: swimsuits; cats; near-nude guys in bow ties; gleaming platters of food – her collection deserved better. Happily we had just had a BIG New York Times best seller with Miss Piggy’s Guide to Life, and in 1984 the publisher, Henry Holt, was more than happy to try a follow-up: it became the now legendary Miss Piggy’s Treasury of Art Masterpieces From the Kermitage Collection. An old friend, the comic genius Henry Beard, had written the Guide, and I enlisted him again to provide the text for the Kermitage.

That Christmas, a charity exhibition of the collection was held at a very posh and highly prestigious New York gallery, the pictures blown up to near the size of the originals (and for the Botticelli, that was BIG), and framed in gorgeously gilded classic antiques by the same company that frames for the Metropolitan Museum. Sets from the shoots were recreated; costumes were lovingly displayed. Elegant throngs came, gasped and smiled. Something very special was happening. It culminated in The Auction.

Henson Associates had long supported the Graham-Windham Foundation, a marvelous charity that helps kids at risk. In 1986 Jim was chosen as the honoree for their big annual fund-raising gala. And it was decided that in order to help with the fund-raising, The Pig would donate some select items from her collection for auction at Sotheby’s. If memory serves, she also provided a Holbein of Fozzie Bear as a “Jester In the Court of King Henry VIII” (“Bananum In Aure Habeo” read the Latin caption, for, indeed, he did have a banana in his ear). And the piece de resistance was a bronze cast of Degas’ the “The La Danseur,” brilliantly reinterpreted in her own image and tricked out with hair ribbon, tutu and pearls. Breathtaking! As was the price. It fetched, I believe, $10,000. At least that’s my memory. Please don’t correct me. Unless it was more.

Later, The Kermitage did appear as a calendar – and as posters and postcards and probably on place mats and tee shirts. But find the original book if you can, with its marbled endpapers and map of the Kermitage Museum (every gallery with its own cafeteria and gift shop). A class act! 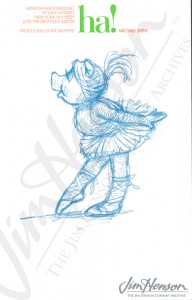 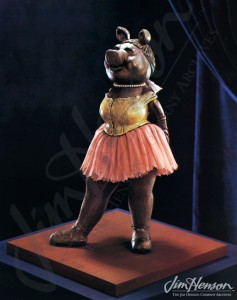 The “The La Danseur” bronze sculpture from The Kermitage Collection. 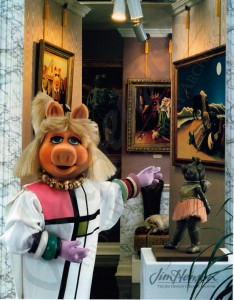 Miss Piggy welcoming visitors to the exhibit of Art Masterpieces from The Kermitage Collection.