When Jim traveled on business, it was often in the company of one or more of his five children. His oldest, Lisa, then a student at Harvard, would eventually become a film executive, serving as President of Columbia Pictures before moving over to run her father’s company. The opportunity to meet executives in the field and to attend Jim’s business meetings was enormously helpful in Lisa’s professional development and understanding of how movies and television got produced. The April 1980 trip that Lisa and Jim took to California included a visit with Sherry Lansing and a discussion with her of their idea for an interactive film. Lansing, who would become the first female head of a major Hollywood studio when she was named President of 20th Century Fox, was a terrific role model for Lisa, something Jim no doubt recognized.

Following their California trip and a visit to Jim’s parents in Albuquerque, Lisa and Jim continued to develop their movie idea, eventually working with Jon Stone and Maurice Sendak. The movie concept centered on a mechanism for changing the course of the film’s plot in response to the reaction of the audience. In 1980, this would have required multiple projectors and an agile projectionist, but later, the ability of an audience member to impact the direction of a storyline became standard in digital games and entertainment.

Learn more about Jim and Lisa’s collaboration with Maurice Sendak and Jon Stone. 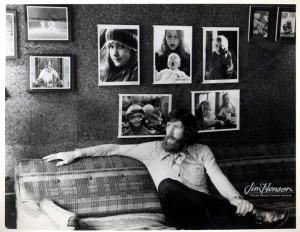 Jim in his office with photos of his children, mid-1970s.