A delightful musical sequence in The Muppets Take Manhattan featured Miss Piggy’s fantasy of what it might have been like had the Muppets been together as babies in a nursery. The idea of baby versions of the characters had started to percolate a couple of years earlier in the Henson art department. Illustrator Sue Venning was working on a mini-book, The Muppet Showbill, and, as Michael Frith described, Jim suggested, “…wouldn’t it be great in that tiny little book to have tiny little pictures of the Muppets as their tiny little selves, in other words, as babies.” It was too late to change the book, but everyone found the idea to be charming and funny. Frith and his art department colleague Jim Mahon kept the idea in mind and after a year or two, they began to make some drawings of the baby characters. Eventually, they asked the workshop to try making some models and then puppets which the performers further developed as characters. Everyone fell in love with them, and it seemed like a given that they should be incorporated into the movie.

The characters as toddlers were enormously appealing, and it was clear that they would translate well to other formats. The licensing department immediately started promoting them for product lines, and the company joined forces with Marvel and CBS to create an animated series, Jim Henson’s Muppet Babies. Celebrating imagination and creativity, the show used innovative techniques like the incorporation of live-action footage and photographic backgrounds which highlighted the way kids interconnect seemingly unrelated ideas, stories, and characters in their dramatic play. In a nod to the classic Looney Tunes, the storylines often parodied popular culture. (Returning the nod, Warner Brothers introduced their own Baby Looney Tunes in 2002.) The series premiered on CBS on September 15, 1984 and was produced for eight seasons. Muppet Babies was honored with five Emmy awards and sent the Henson licensing department into overdrive—the Muppet Babies appeared on diapers, as plush dolls, in storybooks, and on all manner of products around the world. 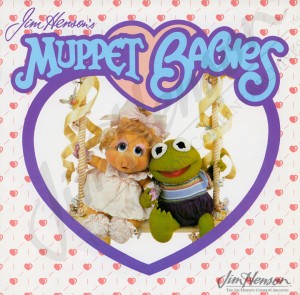 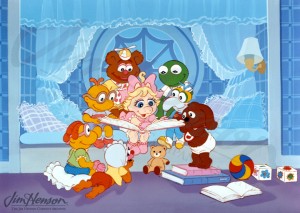 The animated Muppet Babies in their nursery. 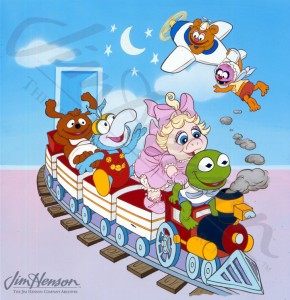