Over the years, Jim and Jane Henson lived in several houses surrounded by woods. Their first home, in Bethesda, Maryland, was in a densely settled community but had a tree-filled back yard that was an ideal setting for curious toddlers and an inviting hammock. The house in Greenwich, Connecticut where the Hensons lived from 1964 into 1971 was adjacent to large wooded areas for adventures and exploration. The light through the trees was inspirational to Jim, and he filmed his older daughters running among them on two occasions. With the addition of a fifth child, Heather, at the end of 1970, Jim and Jane began to think about a new home and moved the following year to a contemporary wood, stone and glass house in nearby Bedford, NY. At the time, Bedford was rural horse country, and the house was set into a forested landscape only lightly developed with homes.

Given the opportunities for off-road riding, the fact that Brian Henson was only thirteen years old in the spring of 1977 didn’t mean he couldn’t enjoy a motorcycle. He received one as a gift from his parents. As Brian explained recently, he rode it, “…in the woods all around the house and on a horse farm nearby where they had an old horse race track that wasn’t in use anymore.” At the time, mopeds were popular among suburban teens so the leap to a motorcycle in that rural setting would not have been unusual. Brian continues to enjoy riding a motorcycle and has one now with a sidecar for family members. 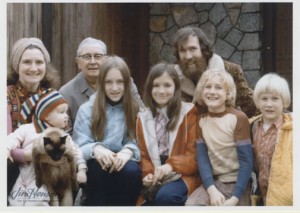 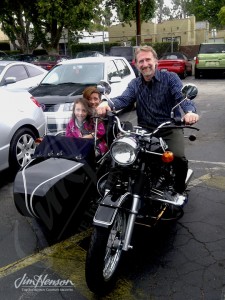 Brian Henson, his wife Mia and their daughter Amelia with his current motorcycle.