After his first television performing job on Washington, DC’s WTOP in June 1954, seventeen-year-old Jim moved over to the NBC affiliate, WRC, in late July. Jim performed his characters on a number of shows there including Circle 4 Ranch and Footlight Theatre. The following March, a variety show began to air at 2:25-3:00 PM, appropriately called Afternoon. It was hosted by Mac MacGarry and a young Willard Scott, and featured Jack Maggio singing with the Mel Clement quartet. The entertainment was rounded out by a fashion and cooking segment with Inga, and a musical or comedy bit from the Muppets. Their popularity led to Jim’s first solo show later that spring: Sam and Friends. Jim continued to perform on Afternoon during its year-long run at various time slots and with various personalities.

Learn more about Jim’s earliest television performances on Afternoon and other programs. 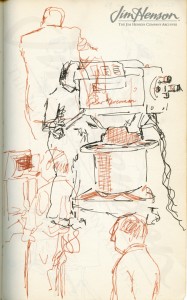 Jim’s sketches of behind the scenes at WRC-TV. 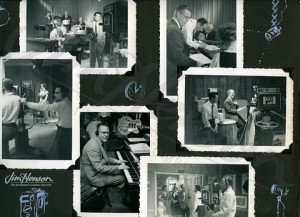 Jim’s photos behind the scenes at WRC-TV.

In Our Town was another WRC show that sometimes featured Jim’s Muppets.