At the start of 1988, Henson Associates bought out the remaining distribution rights to the Muppet Show held by ITC Entertainment. That meant that Jim was free to pursue his own deals for re-running the show. He made a deal with Ted Turner’s TNT for the exclusive US rights to re-run Fraggle Rock and The Muppet Show for four years. The shows went back on the air, and Jim and Ted Turner started talks about other projects.

The following year, Kermit became the spokesfrog for The Better World Society, a not for profit organization created by Ted Turner and others to encourage the media business to use television to (according to its press kit) “…instill in citizens of all nations a sense of common responsibility for the fate of life on Earth.” The Muppets starred in two public service announcements. Kermit asked “What if everyone in the world lived in one house?” He concluded, after scenes of many different types of monsters sharing a home, that, metaphorically, “We do.”

Jim saw his involvement in The Better World Society as a way to share his message about the power of television to change attitudes on a global level. At a presentation hosted by Turner’s group, Jim acknowledged that television is a business, “…a ratings-driven for-profit industry,” but he also warned his audience that they must remember that, “… television is a cultural force…and can do things for the betterment of the entire culture.” He continued, “That has enormous value, value that maybe you can’t factor in the number of soap bars sold, but value that can make a difference in the quality of the lives we lead. We have to appreciate that, and make sure that the medium offers more than just ‘what sells this week’.” 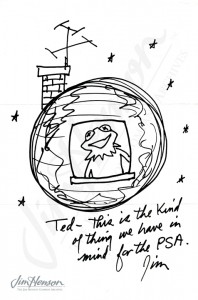 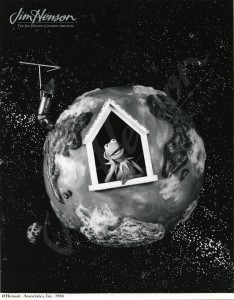 Kermit as he appeared in the Better World Society PSA.