Jim spent a good deal of time in Colorado during 1982. As his son Brian was finishing up high school, he looked for a college where he could study astrophysics, and Jim took him to see the University of Colorado at Boulder. Around the same time, Jim was developing a television special with John Denver that revolved around a Muppet camping trip near Aspen. Shooting started in the summer, and Brian enrolled in classes at the University that September. When Jim and his team came back at the end of that month to finish the shoot, it was only natural for Brian to come to the set and visit with his dad.

From the time he and Jane started having children in 1960, Jim made sure his five children always felt welcomed in his workplace and made a point of arranging to have them visit and/or work with him while he did his job. Jim was often away from home so it was important to him to integrate members of his family into his travels, his business meetings and his other activities whenever possible. Whether appearing in early Sesame Street counting films, building lobsters in the Muppet Workshop, or helping the characters to ride bikes, the Henson children were a regular and important presence in Jim’s professional life.

Learn more about the John Denver and The Muppets: A Rocky Mountain Holiday special.

Learn more about Brian Henson’s work with his dad. 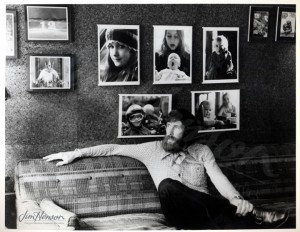 Jim sitting beneath photos of his children in his East 67th Street office, 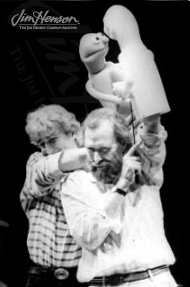 Jim and Brian demonstrating puppetry techniques in France in 1987.