Muppet appearances on The Jimmy Dean Show, The Today Show and The Tonight Show gave Rowlf and Kermit a national audience and inspired the Ideal Toys Company to market plush versions of Jim’s alter egos. While Jim oversaw the creation of rubber hand-puppet versions of his Wilkins and Wontkins characters that were used as premiums by the coffee companies they represented, the Ideal Toys deal was Jim’s first real foray into the world of consumer products.

The plan was to create three toy puppets: Kermit, Rowlf and Snerf (an abstract monster character that popped up and down). Only two were made – the Kermit and Rowlf dolls were widely distributed, but it appears that the Snerf doll never went beyond the prototype stage. A sales film featuring the dolls and their puppet counterparts was also produced – with great comic effect. Given the great care that was later used when marketing Sesame Street toys, it is amusing to see how the Ideal Toys spot was much more like the Wilkins commercial in its use of the hard sell. This is the only time you will hear Kermit saying, “Oh, buy, oh, buy us, oh, buy us, we beg. And if you don’t buy us, we’ll bite you in the leg! We’re loving and cuddly — we’re a bundle of charms. And if you don’t buy us we’ll break both your arms.”

To launch the marketing effort, Jim and his team appeared before the Ideal sales group in the weeks leading up to Toy Fair, the annual toy industry trade show. Rowlf, then Jim’s best known character, was accompanied by a small version of himself, Little Rowlf, and welcomed the group. After a bit of shtick, they introduced Kermit, and they practiced some sales techniques together, skewering Ideal with jokes about rival Mattel. Finally, the toy versions of Kermit came out and made their pitch. They were a hit. In an appreciative letter, the Director of Sales Promotion Bill Reese wrote Jim, “Not only were you entertaining, you created an attitude and environment for our friends, The Muppets, that is bound to influence every single salesman who was a witness to the show. They now have “a feel” of the characters and the merchandise, which should send then on their way well motivated towards successful selling.” 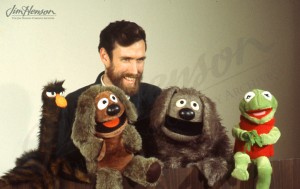