Along with making television commercials for an array of companies in the 1950s and 1960s, Jim and his team created humorous films and live presentations to liven up corporate meetings. Sometimes these promoted a product or introduced a new advertising campaign. Other times, they helped celebrate the most successful sales people while they were being rewarded at a warm-weather corporate retreat. But most often, the Muppet appearances were just meant to wake up the audiences and provide some comic relief from what might otherwise be a very slow-moving presentation.

Jim’s biggest meeting film client in the 1960s was IBM, coordinated through their audio/visual program manager David Lazer. When Lazer came to work for Jim as a producer in the 1970s, he brought the meeting film idea with him and began a long-running sideline for Jim’s company: Muppet Meeting Films. These funny “coffee break” films were not specific to a particular company and could be shown to any audience trapped in the tediousness of a long sales conference or corporate training event. Over twenty years, starting in 1975, the Henson Company made about fifty Muppet Meeting films. 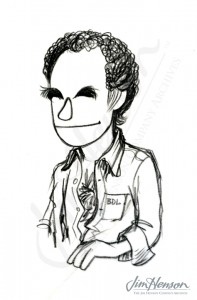 Michael Frith’s puppet design for a meeting film character based on David Lazer. 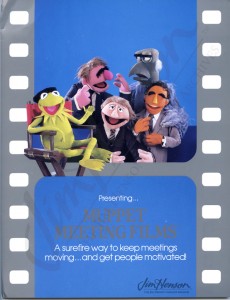