In May of 1983, Brian Henson decided to join his dad on production of the third Muppet feature film, The Muppets Take Manhattan. He was assigned to Faz Fazakas, often referred to as an electro-mechanical wizard, to help with special effects. Some of these involved radio control of the puppets and other animatronic techniques. Brian also performed, working the marionette rig for Scooter’s bicycle ride. Talented in both areas and interested in the work of his father’s Creature Shop, Brian kept an eye out for opportunities in fantasy film work.

After The Dark Crystal, designer and fabricator Lyle Conway took the lead on the design team for Walter Murch’s film Return to Oz. It was a small creative community working in London on these types of projects at the time, so many of The Dark Crystal crew found work together on the Oz film or back at Henson the following year on Dreamchild. Post Muppets Take Manhattan, Brian was doing some work on Fraggle Rock and was offered an audition to do special effects puppetry for Return to Oz – he was offered the job, performing Jack Pumpkinhead. Happy with a chance to establish himself outside his father’s company, he accepted immediately. Following that, he worked on another outside project, Santa Claus: The Movie, and then came back to Henson for Labyrinth. Frank Oz’s film, Little Shop of Horrors, was Brian’s next project and from there, he was firmly entrenched in the work of the Henson Creature Shop, living in London and beginning to direct.

Brian’s work both inside and outside the company during the 1980s allowed him to establish relationships on both the technical and performing sides of the business, giving him a strong foundation for his leadership role in the following decade. With his talent, experience and connections, he was ready to take on the challenges of what would become successful and critically acclaimed projects: Dinosaurs, Farscape, Muppets Tonight and three Muppet feature films. 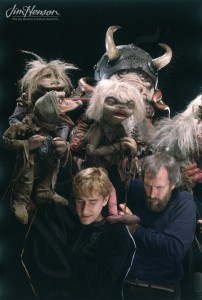 Jim and Brian Henson perform together for Labyrinth, 1985.