Being in Washington, DC and popular on the local airwaves, it made sense that several government agencies sought Jim’s contributions to various public information efforts. He and Jerry Juhl had performed as part of the US Department of Agriculture’s presentation at a Food Fair in Hamburg in 1961. Their contact at the USDA, Barbara Witt, recommended them to the US Information Agency. So, from January 29th to February 12th, Jim and Jerry took another trip to Germany, this time to Berlin on behalf of the USIA. Their contract required that they, “Present a puppets play program and act as conferenciers in connection with the entertainment program of the American Exhibit ‘AGRARAMA’…” and that their performances would total about three hours each day of the exhibit.

Jim’s plan was to do more or less the same performance they had done in Hamburg and used his experience there to make some specific requests regarding his staging requirements. He explained that they worked kneeling, holding the puppets over their heads, and that the “puppet playing ledge” should be at 54 ½ inches, higher than in Hamburg because, “…we has some trouble with our heads showing.” He also asked for a scrim or audience viewing slit and an electrical outlet to plug in their robot. The show must have been a success as Jim received an invitation to reprise it the following year, but busy with other things, he declined.

Jim did do some additional work for USIA in 1962 in service of their efforts supporting democracy in the Dominican Republic. He was commissioned to produce nine one-minute spots. Using lessons and messages from various USIA brochures like “You and Your Political Party,” “Your Rights As A Human Being” and “Your Government and Free Economy,” Jim and Jerry Juhl wrote scripts and performed in English, and the films were translated and dubbed into Spanish. Five years later, Jim participated in a USIA television special to be aired by foreign broadcasters, performing his “Beautiful Day” and “Glowworm” monster sketches.

Learn more about Jim’s 1961 participation in the USDA show in Hamburg, Germany.

See a short film Jim made for the USIA’s work in the Dominican Republic. 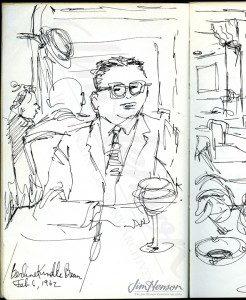 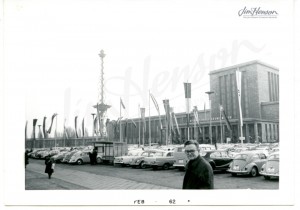 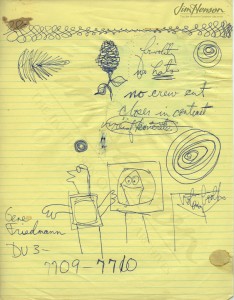 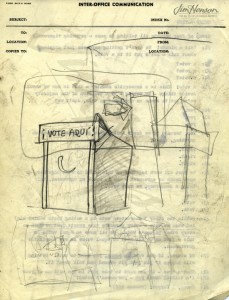