Having tested the half-hour format with a celebrity host on The Muppet Valentine Show in 1974, Jim used his second special The Muppet Show: Sex and Violence to try out new characters and the back-stage setting. It was this show that Jim was editing in late January 1975, looking forward to a March 19th airing on ABC. Despite a positive audience response to both shows, Jim was unable to make a deal for a series on a US network. Instead, he contracted with UK television producer Lord Lew Grade to launch The Muppet Show series, and used what he had learned on the previous specials in the creation of 120 unforgettable episodes of muppetational fun.

Learn more about this Muppet Show pilot here and here. 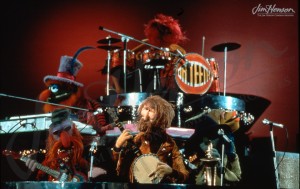 The Jim puppet sat in with The Electric Mayhem on The Muppet Show pilot, 1975. 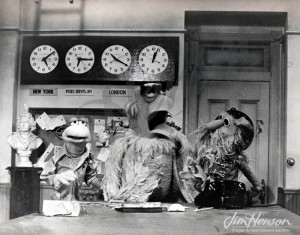 Backstage at The Muppet Show pilot, 1975.