In its first two seasons, The Muppet Show garnered numerous awards and honors recognizing the show’s entertainment value and underlying messages of optimism and camaraderie. For the most part, they came from obvious organizations like the Academy of Television Arts and Sciences (the Emmy people), the British Academy of Film and Television Arts (the BAFTA people), and other broadcast or entertainment groups. In its third season, the Muppets won additional Emmys, a Grammy, and a Peabody award, and they (and Jim) also got the attention of a broader array of honoring groups.

In 1978, the Mary Washington Colonial Chapter of the National Society of the Daughters of the American Revolution awarded Jim their Television Award of Merit for The Muppet Show, the first non-historical program to be so honored (Captain Kangaroo and Fred Rogers won in later years). Through their historic preservation and educational programs, the DAR promotes the American liberties and values of our founding fathers. Certainly Sam the Eagle would have been very proud to accept the award on Jim’s behalf. 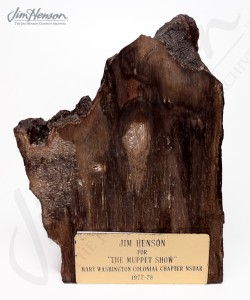 Jim’s award from The Mary Washington Colonial Chapter of the National Society of the Daughters of the American Revolution, 1977-78. 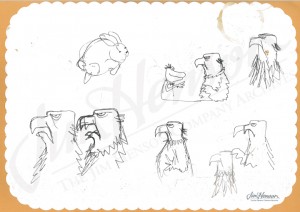 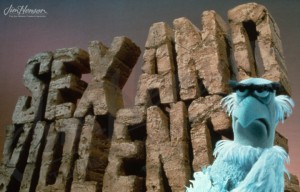 Sam the Eagle in a publicity photo from The Muppet Show: Sex and Violence pilot, 1974.

This entry was posted in 01-January '78, 1978, Honors, Muppet Show and tagged Academy of Television Arts and Sciences, British Academy of Film and Television Arts, Daughters of the American Revolution, Emmy Awards, Grammy Awards. Bookmark the permalink.