In frigid weather (as Jim noted, it was well below freezing), Jim and his crew shot a short film to be shown as part of a live presentation at the Flying A Dealers (representing American Oil) meetings in various cities a few weeks later. In the film, at an Esso Service Station, a fully automated attendant (one of Jim’s imaginative robot puppets), provides service to an unfortunate customer. Typical of Muppet robots, this one is cheerful and hardworking but makes a terrible mess of the situation, ending the film with a bang. Once again, while seeming to celebrate the possibilities of the digital age, Jim’s character underscores the need for human interaction and the unmatchable flexibility of the human brain.

Learn about another misguided Henson robot. 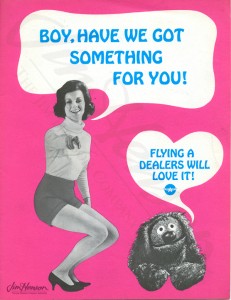 Brochure promoting the Flying A Dealers meetings scheduled for early 1968.

This entry was posted in 01-January '68, 1968, Commercials and tagged American Oil, Flying A Dealers. Bookmark the permalink.