When Jim created the Henson Foundation in 1982, he hoped to promote and develop the art of puppetry in the United States. His dream has been a success and for more than three decades, the Foundation (now called The Jim Henson Foundation and under the leadership of his daughter Cheryl Henson) has introduced thousands of adults and families to the magic of puppet theater through grant-making and public awareness efforts.

Since its inception, the Foundation has awarded over 600 grants to more than 250 American puppet artists for the creation and development of innovative, contemporary puppet theater. Past grant recipients include MacArthur Fellow Julie Taymor, director of the Broadway smash The Lion King; Roman Paska, whose dramatic interpretation of Strindberg’s The Ghost Sonata was a hit at the 1994 Henson Festival; Ralph Lee, whose production A Popol Vuh Story was also presented at the 1994 Henson Festival and went on to tour New York City public schools; MacArthur Fellow Lee Breuer’s company Mabou Mines, whose production Peter & Wendy was featured at the 1996 Spoleto Festival USA and the 1996 Henson Festival, followed by two runs at New York’s New Victory Theater; Basil Twist, whose productions Symphonie Fantastique and Arias with A Twist each had acclaimed runs in New York; and award winning children’s book author and illustrator Brian Selznick for his 2006 project The Christine Jorgenson Story.

Jim supported the puppetry community in additional ways. He was active in both the Puppeteers of America and the international puppetry organization, Union Internationale de la Marionnette (UNIMA), hosting festivals and meetings. And in the 1980s, Jim produced a six-part television series, Jim Henson Presents The World of Puppetry, which highlighted international puppet masters. Puppeteer and founding Henson Foundation board member Allelu Kurten remembered, “Jim’s generosity of spirit was always there. He cared and he listened and his quality of listening had an intensity and focus that made his advice and any eventual solution right on the mark. After the 1980 UNIMA Congress and World Puppetry Festival which showed so much great work from the U.S. and abroad, Jim and Nancy Staub focused their attention on the needs of the field and especially the needs of emerging U.S. artists creating puppet theatre for adult audiences. Jim started the Foundation in response to those needs so that an artist would have a bit of money and breathing space to develop his own vision without having to give up or copy some one else’s. The Foundation is an embodiment of Jim’s caring and, for those of us who knew and loved him, the thought that his unique generosity of spirit continues in the positive and on-going way is immensely cheering.”

Jim’s participation in the global puppetry community was far reaching. The next UNIMA festival was held in 1984 in Dresden, East Germany, as described by puppeteer Roman Paska: “For the puppeteers of my generation, Dresden (the 1984 UNIMA Festival) was a watershed. Awed by the previous, 1980 Festival in Washington, which celebrated the grand old world of puppetry as we knew it from our libraries and journals, Dresden opened the gates to a new generation of experimental companies and performers, and while primarily European, a few of us (that is, younger American artists) were confronted for the first time with significant new ideas and trends, particularly in what was then a rapidly changing Eastern Europe. It seemed like everyone who was anyone in the puppet world was in Dresden, an atmosphere that fueled a contagious euphoria that I myself have rarely experienced elsewhere. With performers from throughout the world we felt that we were on the brink of something awesome, something momentous, something even magnificent, maybe a brave, O brave new world that has such Puppets in it!; and we left Dresden convinced that the stakes were finally high, that the puppet could and would proclaim a new era, that puppeteers would pave the way, and that puppet theatre was indeed destined to be the theatre of the future. The Hensons were there, and the work of the Henson Foundation and its Festivals has continued to build on that energy and experience ever since, helping the puppet world to remain a place of exalted ideals and exuberant prospects.” 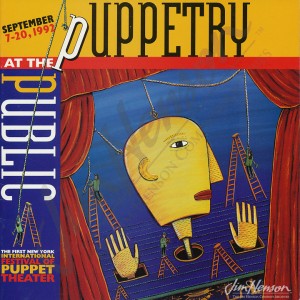 Poster for the Henson Foundation’s first International Festival of Puppet Theater held in New York in 1992. 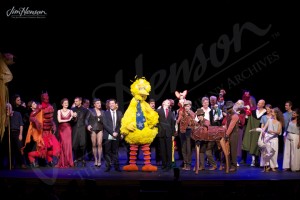