For more than two decades, Michael K. Frith worked with Jim Henson and the Henson Company as an art director, conceptual designer, producer, and executive. He was instrumental in the creation of Fraggle Rock, Muppet Babies, and The Wubbulous World of Dr. Seuss, and designed numerous Muppet characters. With Miss Piggy as his muse, Michael conceived award-winning calendars, books, and extraordinary licensed products. He recently shared his reminiscences with us.

A LONG time ago, before anybody had even heard of Big Bird or Bert or Ernie or Cookie Monster, I was an editor/art director at Random House, working with Dr. Seuss, writing and illustrating kids’ books and living in Brooklyn. One night when I got home after a long day of pencil pointing (fortunately the electric sharpener had recently come into being), I made the mistake of asking my six-year-old daughter what she’d done that day. Oh, she’d been “to town” with her best friend to visit her friend’s daddy (our neighbor) at work (he was a television director), and a giant yellow bird had come walking down this street… WHAT?

Well, THAT was the beginning of the end.

My neighbor, it turned out, was directing a pilot for an experimental educational kids’ show called “Sesame Street.” They didn’t expect it to last, but as he explained it, its goals seemed remarkably parallel to the longtime curriculum for our Beginner Book series, and I wondered if there might be some synergy there. I got in touch with them, and I soon found myself putting together a publishing program between Random House and Children’s Television Workshop (remember them?). The first books were ready for publication in 1971, and I was literally about to send all the art to the engraver when someone at CTW dropped the bombshell: “You’ve shown all this to Jim Henson for approval, right?”

HUH? That name had never come up in any of our dealings — it seemed to have just slipped their minds. So I found myself, late the next evening, staggering up the narrow stairs of a New York townhouse on 67th Street, hauling a huge cardboard portfolio filled with about 70 lbs of illustration board for this guy’s inspection. I was not happy, not just because of the inconvenience (plenty!), but because I had neither the budget nor the time to make any changes and meet our publishing deadline. Fortunately all went well. Jim seemed intrigued to see the characters illustrated — it had hardly happened before. And especially interested in some of the drawings I’d done showing them in action — and what they looked like from the waist down. “Cookie Monster,” he said, with some surprise, “he’s kind of like some beaver or something?” “Seemed right to me,” I answered cheerfully.

And the books went to press.

More followed, and the calls from Jim began. Would I mind doing some character sketches for a special he was doing, “The Muppet Musicians of Bremen”? (Sure.) Would I help him with the redesign of a new Sesame Street character, Mr. Snuffleupagus? (Sure.) Would I…? …Come work at Muppets?

Naaah — I loved what I was doing; why change?

But he was relentless, and over a couple of years I found myself sucked in. The tipping point was the TV special “Sex and Violence With the Muppets,” really a pilot for “The Muppet Show.” Jim kept insisting that I come by the workshop to see the progress as the characters I’d sketched for it — especially Dr. Teeth — took shape: it was irresistible, and I caved. For the next year or so I lived with a foot in each camp, finishing up a bunch of Random House projects, but going on company retreats with Henson Assoc., continuing to design characters (Saturday Night Live), and so forth. In December 1975, Random House gave a farewell/Christmas party for me (Jim came, and a Random House cohort there pronounced him “very brave”), and within days I was ensconced in my “office” at Henson.

Office? There were no more offices there; all four were taken, so I went from one of the largest offices in Random House (well, shared with Dr. Seuss) to an end of the Henson conference room table. I was hardly alone: looming in the corner was an enormous — I mean four-foot, five-foot high — pile of… stuff. It turned out that Jim, being Jim, had just assumed from the outset that I’d eventually come to work there, so whenever anything came in that he thought would fall into my bailiwick, he’d just toss it in the corner to wait for me. Sesame Street licensing was just beginning to heat up, so there was a ton to vet and correct: much of the pile turned out to be artwork for a Sesame encyclopedia that was being produced in Japan. It was WAY past due — Jim hadn’t been too concerned about their deadlines — and it was just… terrible. And it came with an extra dividend. Every morning when I arrived (and I was EARLY), there would be sitting in our little reception area a smiling Japanese man with a briefcase on his lap. Every night when I went home (and I was working LATE) he was still there. He never said a word. As far as I know, he never opened the briefcase. I labored on, sheet after sheet after sheet of reconceptions and corrections. Every now and then, usually late at night, our Producer, David Lazer, would wander in, peer over my shoulder and murmur, “It’ll always be a sow’s ear.”

But finally it was done. The silent Japanese man collected the enormous stack of drawings and corrections, smiled again, bowed, and, still without a word, disappeared into the night. I never did see the final result.

That’s how, appropriately peculiarly, it began. Over the next couple of decades there would be sows’ ears aplenty to contend with, but also a marvelous mountain of purses of exquisite silk created by the extraordinary people with whom I got to work, as well as toys and games, posters and books, characters and whole shows to invent, illustrate, art direct, design and produce. What amazing opportunities. What an amazing group of people. Everything was new, everything was being invented as we went: it was a time that could not be — nor ever will be — replicated. 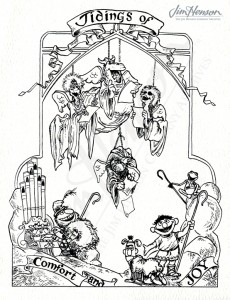 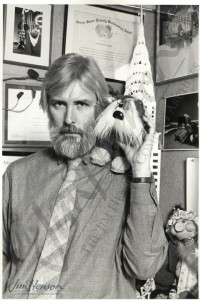