The Art of The Muppets, an exhibit providing a sweeping look at the characters and the people behind them, originated in 1979 with a slightly smaller exhibit at the New York Public Library’s Performing Arts Library at Lincoln Center. The popularity of the show inspired a larger version at The San Diego Museum of Art and a subsequent tour. Almost ten years and twenty venues later, the exhibit, with a new name, The World of Jim Henson, had its final showing in London at the Museum of the Moving Image. For many, this seemed to be a homecoming for the Muppets as The Muppet Show and The Great Muppet Caper had been shot outside London and many there considered them local talent.

The sojourn at the British Film Institute’s Museum of the Moving Image marked the end of what was a very successful tour for The Art of The Muppets, and it seemed like just the right kind of museum in which to tell Jim’s story. History repeats itself and today, after more than four years on the road, the Jim Henson’s Fantastic World exhibit has made its way to New York’s Museum of the Moving Image for a final showing. Having traveled to art, science and history museums in cities large and small, being at the Museum of The Moving Image is the perfect place to take a final look inside Jim’s creative thinking through the collection of artwork, images, puppets, props and footage featured in Jim Henson’s Fantastic World. To see Jim’s work and innovations in the context of the history of the moving image and beside the work of young artists working in the field today is particularly appropriate and helps to explain just how revolutionary Jim was and what major contributions he made to film, television, puppetry, and visual media in general. The exhibit is view until January 16, 2012, so there is still time to get to the museum in Astoria, Queens (across the street from where Sesame Street is shot) and learn more about Jim Henson’s Fantastic World. 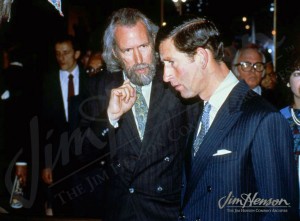 Jim and Prince Charles at the opening of The World of Jim Henson exhibit, 1988. 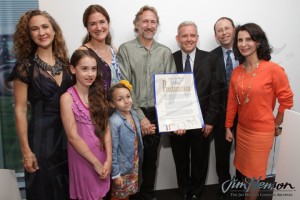 Henson family members receive a proclamation from the NYC Mayor’s office at the opening of Jim Henson’s Fantastic World at The Museum of The Moving Image, 2011.

This entry was posted in 09-September '88, 1988, Exhibits and tagged Art of the Muppets, Jim Henson's Fantastic World, London, Museum of the Moving Image. Bookmark the permalink.