The first Sesame Street pilot shows were taped in mid-July 1969. In these early efforts, the scenes on the street with human actors were meant to show reality so did not include Muppet characters. When the shows were presented to test audiences, however, it was clear that some changes were needed. According to an April 1971 interview with Muppet builder Kermit Love which appeared in IMAGE, the program guide for Channel 13, Jim was asked to find a way to add more fantasy to the show. Love explained, “His idea was for a large, free-standing Muppet – a character that would be physically uninhibited by controls or even a microphone cord, a character that could move among the people of Sesame Street and be sympathetic to all of them.”

Jim loved bird characters and had designed a large, walk-around bird in 1963 for a Stouffers Food commercial that was never produced. He revised his design, and Love started building the character. A puppeteer was needed for this important role, but none of Jim’s regulars were interested. During his annual trip to the Puppeteers of America festival that August, he kept an eye out for talent. On the last evening of performances, he watched Massachusetts puppeteer Caroll Spinney (spelled Carroll at that time) present a multimedia extravaganza. Though the show didn’t work out as planned, Jim was impressed and invited Caroll to New York to perform Big Bird.

Things started slowly, as Caroll explained in a 1973 interview, “Big Bird was very incidental to Sesame Street for the first 100 shows, just adding a little fantasy to the realistic street scene. Then one day I did a solo thing where I went into Gordon’s kitchen, heard a sound, and built up this fear about monsters in the hallway. It worked, and the writers began creating bits for me.” Within a year, Big Bird was on the cover of Time magazine. Caroll continues to perform Big Bird, and his alter-ego Oscar the Grouch, as we head into the 42nd season of Sesame Street.

Watch Big Bird during an early season of Sesame Street. 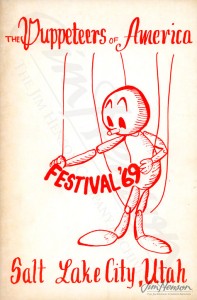 Program cover for the Puppeteers of America Festival, 1969. 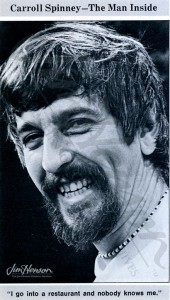 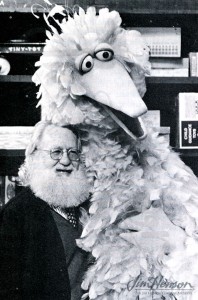 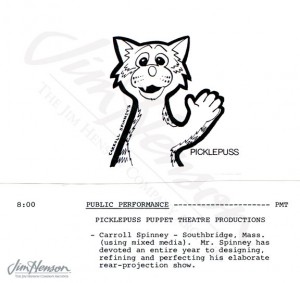