Just a couple months after The Muppet Movie premiered in the summer of 1979, Jim started planning for his next feature film. He had learned a lot on the first shoot, saw what worked on the screen, and was excited to take on the directing responsibilities along with everything else. He made notes in a blank sketchbook with his ideas for a story that would have the cinematic range of his first film but with the feel of a 1930s movie musical, the intrigue of an international heist story, the pace of an action adventure, and the hilarity of a big comedy romance. All of this would be set in an atmospheric, European location and use state-of-the-art effects to achieve mind-boggling puppetry. The first step was to work with Muppet head-writer Jerry Juhl and others to get the story hatched and turned into dialogue.

In September 1979, Jim met with veteran comedy writer Jack Rose to discuss the film – not a surprising choice given Rose’s success writing for Bob Hope, particularly the classic buddy picture Road to Rio. That November, they met again in Los Angeles with Jerry, Frank Oz, and Joe Raposo who would compose the music for the film. By January 1980, Jerry and Jack Rose had written a treatment and they started work on the first draft of the screenplay. While some of the characters were different (instead of Lady Holiday there the Countess Santorini, for example) and there were different settings (Windsor Palace instead of The Mallory Gallery), the basic story elements were there in that first pass.

Jack took a trip to London to work with Jerry on the script that March, but Jim felt it wasn’t going well. The next draft, titled The Muppets Hit the Road, needed help and when Jim went to Los Angeles for the Oscars in April (The Muppet Movie’s music was nominated) he met with writers Tom Patchett and Jay Tarses to discuss a rewrite. They came to London to start work later that month and by June, produced a script based on Jerry and Jack’s called The Good, The Bad and The Muppets. By the end of July, a composite script with the work of all four writers was complete and credited to both teams. Jim finished shooting the final season of The Muppet Show on August 22nd, and just two weeks later, yelled “Action!” on the set of The Great Muppet Caper. 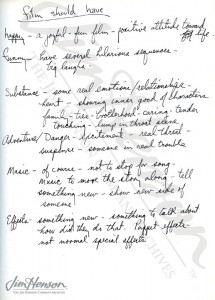 Jim’s notes on what should be included in his second film, 1979. 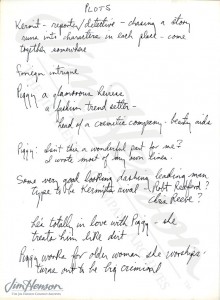 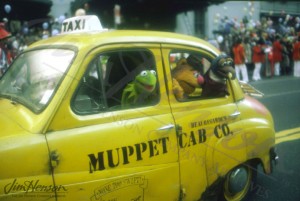 Beauregard’s cab, an element from the very first treatment of The Great Muppet Caper, 1980. 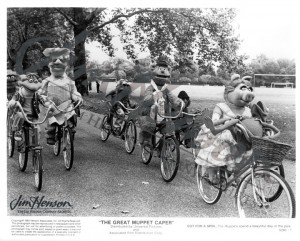 The Muppets on bicycles from The Great Muppet Caper, incredibly complicated to shoot.