At the May 1980 christening of writer Jocelyn Stevenson’s son, Jim brought up his idea for an international children’s television show that he hoped would bring about world peace. As audacious as that sounds, it was a pretty simple concept. As Jim explained, “The show basically started as an international concept, because we had an audience of a lot of kids all around the world that knew The Muppet Show and Sesame Street. We wanted to try to give the program the concept of understanding other people’s points of view, to understand why countries don’t get along with each other, on a very childlike level.” The following October, Jim organized a dinner at Keats, a London restaurant, to further explore the idea. In attendance were Peter Orton, who handled his international television sales, Duncan Kenworthy, a young producer from international Sesame Street, Jocelyn Stevenson, then writing children’s books, and David Lazer, The Muppet Show executive producer. By the end of the meal, the consensus was that the ICS (International Children’s Show) was a good idea.

In March, 1981, Muppet head writer Jerry Juhl, Jocelyn Stevenson and conceptual designer Michael Frith met with Jim at London’s Hyde Park Hotel. They worked up the most basic concepts for the series that Jim then spelled out in a treatment called The Woozle World. That July, a series of meetings were held over three days and included Jim, Jerry, Duncan, Jocelyn, Michael, and for a couple of days, Muppet designer Bonnie Erickson and her husband Wayde Harrison. Jim had the opportunity to work through The Woozle World treatment with the group and begin collaborating on the details of the show.

Jerry, Jocelyn and Michael followed up with a couple of raucous weeks ensconced in Jim’s Hampstead house, figuring out what the Fraggles were and where they lived. Michael remembers that, “It was the most intensely creative time I have ever spent. There was amazing whooping and weeping…of the good kind!” These brainstorming sessions resulted in settling on the Fraggle name and a series of lists entitled, “What we know about…” detailing any and everything from the size of the characters to the contents of a Doozer’s work belt. The following month, the group reconvened to refine their vision and formulate possible plotlines – switching from the show’s rather English working title Fraggle Hill to the more dynamic Fraggle Rock. As Jocelyn remembers, “The whole experience was hilarious.” The result was a booklet used to sell the show and to describe it to other writers and designers in a simple straightforward manner with, as Michael described, “…a certain open-endedness and magic to be explored.” 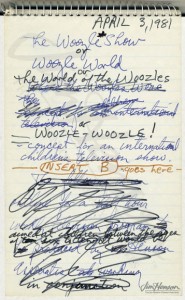 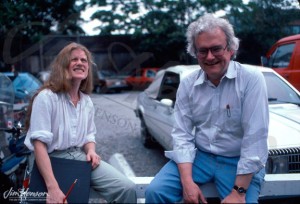 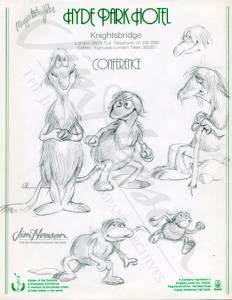 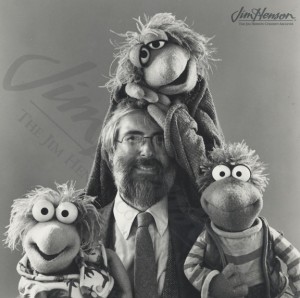