Having worked in London on and off for about a decade and having purchased a home there, Jim was an honorary local and was well aware of the popularity of the Royal Family. Until his wedding, Prince Charles had been the most eligible bachelor in the UK and of great interest to the tabloids and the public. Jim recognized his popularity and Executive Producer David Lazer invited him to be on The Muppet Show in 1977. A response just five days later from Buckingham Palace explained that while the invitation to appear was most kind, “…His Royal Highness is already fully committed for next year and no further commitments can now be considered.” Letters of invitation were also drafted (probably by Jerry Juhl) from Kermit and Sam the American Eagle but were never sent.

The Royal Wedding between Prince Charles and Lady Diana Spencer was all anyone could talk about during the summer of 1981, and Jim took an interest in the proceedings, marking the day in his journal. All the hoopla was irresistible to the Muppet costumers and editors over at Muppet Magazine. The wedding went on the must-parody list, and soon Kermit and Miss Piggy had new additions to their wardrobes – for Kermit, a uniform much like Prince Charles’, and for Miss Piggy, a near replica of Princess Diana’s wedding dress. The ensembles were memorialized in a glamorous photo on the cover of the Spring 1983 Muppet Magazine.

Every move made by the newlyweds was apparently of interest to the media. In a news story on January 12, 1982, it was reported that Britain’s Royal Family ordered custom hood ornaments for their cars. Prince Andrew selected a snail and Prince Charles a horse and jockey. Princess Diana, “the one with the sense humor,” according to reporter Jane Crawford, “ordered a hood ornament in the likeness of Kermit the Frog.” 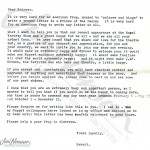 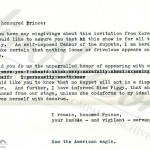 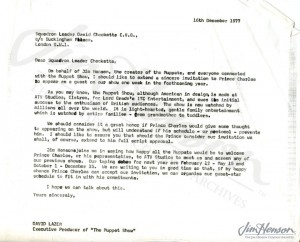 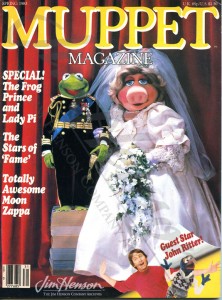 Kermit the Frog and Miss Piggy appearing as Prince Charles and his bride, Lady Diana Spencer, 1983.