Ron Mueck, an Australian sculptor working in the UK, got his start as a puppeteer and builder creating puppets, props, and models for television and the advertising industry. In the 1990s, he began exhibiting his fine art sculptures, many depicting oversized hyper-realistic figures, in galleries and museums. There have been extensive exhibitions of Ron’s work in recent years, and his pieces are in major collections around the world. He recently shared his memories of working with Jim:

I got to know Dave Goelz and Duncan Kenworthy when they were shooting Travelling Matt segments in Australia, helping out as a local assistant puppeteer/puppet builder. I had a fantastic time. I had been puppeteering and building puppets for a children’s television programme for four years (800 or so episodes) and after working with Dave and Duncan, felt the only way I was going to develop in the craft was to try and get a job at Hensons. They must have put in a good word for me because, on a subsequent trip through New York, Jim offered me the job I had asked for.

When I arrived in New York from Melbourne there was no particular project for me to start work on. For a few days they had me hand stitching bits of puppet, more to see what my basic skills were than to do any real work. It seemed that my stitching was adequate but luckily for me the Starbopper project surfaced just then and a memo went around inviting everyone to contribute ideas towards the design of the characters.

Starboppers was a group of space/alien type characters loosely based on Freudian ideas. Each group of three characters inhabited a space ship that was their ‘body’. These characters embodied the ‘mind’ of each ‘body’ and the Freudian principles of Ego, Super Ego and Id.

Jim liked the sketches I sent through to him and I was assigned to the project and spent the next five months churning out sketches and models. Jim was always very enthusiastic and encouraging when he came to see my latest batch of drawings or sculpts. He wasn’t exactly sure what we were aiming for, but he seemed to know when we weren’t there yet. And so I would launch into a new batch of variations. Eventually we arrived at a group of characters he liked the look of and one was made into a finished puppet that was used to shoot a short clip that could be used to drum up interest in the project. And that was last I ever heard of Starboppers!

I moved onto designing characters for another pilot project called Puppet Man. Remember Puppet Man? Do you see a pattern developing yet?

The New York Puppet shop had a wonderful, casual culture of creativity and experimentation and a great group of friendly, enthusiastic people at every level of the Henson ‘family’. For a boy from Melbourne it was a great adventure.

To learn more about Puppetman and see some of Ron’s designs, see entry for March 4, 1987.

See the test footage for Starboppers from 1984. 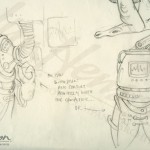 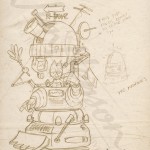 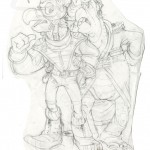 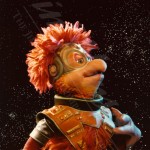