Jim’s first child Lisa, born in May 1960, was immediately swept up in her parents’ lives, traveling with them that summer to Disneyland in California and the Puppeteers of America festival in Detroit. Despite his hectic schedule and constant travel, Jim made sure to include all of his five children in his activities, frequently bringing them to the set, awards ceremonies or meetings. Lisa got to witness her father in action and was often asked for her opinions or ideas for projects. When she headed off to Harvard, Jim was immensely proud, making sure to be available to drive her there to begin her freshman year. She made the most of the opportunities at Harvard, becoming the first female president of The Harvard Lampoon. Her major in folklore and mythology was instrumental in the development of Jim’s series The Storyteller. After graduating (summa cum laude, as Jim noted), her experience with her father in the industry paid off, and she became an executive at Warner Brothers, working for fellow Harvard grad Lucy Fisher. Lisa now serves as CEO of The Jim Henson Company and heads up the development and production for all of the company’s television, film and online projects.

Listen to an interview with the Jim Henson Company’s CEO, Lisa Henson. 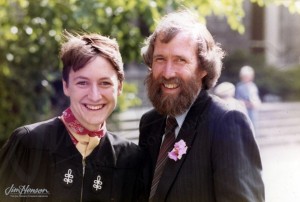