Jim always took great care with the choice of music for his projects and enjoyed collaborating with musicians and composers. In the early years, Jim spent hours going through the record library at WRC in Washington, finding just the right songs for his characters to lip synch. In the 1960s, he had studio sessions with jazz great Chico Hamilton, electronic music pioneer Raymond Scott, and composer/arranger Don Sebesky to create scores for animation projects, commercials and experimental films. Variety show appearances gave Jim access to a range of performers like Tom Jones and Herb Alpert, and Sesame Street was home to wonderful studio musicians and his song-writing colleagues Joe Raposo and Jeff Moss. When it came time to bring guest stars to The Muppet Show, Jim mined the wealth of musical talent on both sides of the Atlantic.

Among the guest stars on Season 1, Paul Williams stood out as particularly in tune with the Muppet musical sensibility. His humor and performance on songs like “Just An Old Fashioned Love Song” (sung with his Muppet doppelganger) made him seem like part of the troop (his small stature didn’t hurt, either). Taped in June 1976, Williams’ episode was just the first of several projects with Jim. The following January, Jim asked him to compose music for the television project Emmet Otter’s Jug-band Christmas. Williams worked closely with Jim to try to fulfill his vision for the show, responding to very specific requests like: “Banjo for Kermit on his bicycle – a happy little banjo pickin’ to accompany Kermit. This would begin just before we see the bicycle and would be cut off abruptly with the crash into the sign. Time: :07 ½ .” When Williams was finished, Jim wrote him, “I’ve said it before, but I’ll say it again – we all love the music in this show, and think it all works fantastically well.” The most memorable song from the show, “When the River Meets the Sea”, was also recorded by John Denver for the 1979 TV special John Denver and The Muppets – A Christmas Together.

Jim’s request for “banjo pickin’” for Kermit lay the groundwork for perhaps the most satisfying collaboration between the two men. In 1978, Williams wrote the music for The Muppet Movie, including Kermit’s banjo-accompanied song “The Rainbow Connection”. Written with Kenny Ascher, it was nominated for an Academy Award for Best Original Song, and Williams was also nominated for Best Original Score. The Muppet Movie album went gold and then platinum and won a Grammy award for Best Children’s Album. He also appeared briefly in the film as the pianist of the El Sleezo Café. After Jim’s passing in 1990, Williams continued his relationship with the Hensons, writing the music for Brian Henson’s first feature film, The Muppet Christmas Carol, appearing at the Muppetfest fan event in 2001, and collaborating on the live stage version of Emmet Otter in 2008. 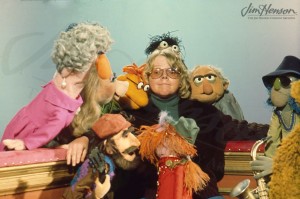 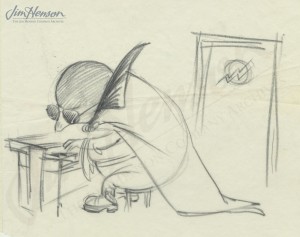