Born in England and raised in Northern California, Frank Oz was introduced to puppetry at an early age by his parents who were active in the puppetry community. To make some money, Frank began performing in high school and quickly established himself with a local puppet company. His career interest at the time, however, lay in journalism which he studied for a while at Oakland City College. When Jim met the 17 year old Frank at a puppetry festival in 1961, he immediately recognized Frank’s natural talent. Two years later, Jim convinced Frank to come to work with him in New York, and the two became performing partners and close friends. Along with his puppeteering responsibilities, Frank pursued other interests, taking college courses and acting classes. He had brief acting roles in some Henson industrial films and appeared in Jim’s award-winning live-action short Time Piece. Along with cameos in Muppet movies, Frank acted in several films directed by his friend John Landis including The Blues Brothers, An American Werewolf in London, Spies Like Us, Trading Places, Innocent Blood, and Blues Brothers 2000. Frank developed an interest in directing, a vocation that incorporates all aspects of performance and filmmaking, and has pursued it with great success over the last thirty years making such memorable films as The Muppet Take Manhattan, Little Shop of Horrors, Dirty Rotten Scoundrels, In and Out and most recently Death At A Funeral.

Back in the 1970s, Frank also pursued live theater roles, occasionally acting in plays. The show that Jim attended in 1974 was called Meegan’s Game, a story about arrested adolescence with Frank playing one of the leads. Written by Elliot Caplin (brother of cartoonist Al Capp) and directed by Paul E. Davis, it was a workshop production, running a few weekends at the Cricket Theatre on Second Avenue to try to raise money from potential backers to mount a full run. The play, without Frank, was eventually produced in 1982. 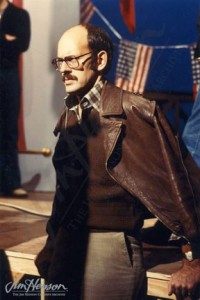