Al Gottesman is an attorney and President Emeritus of The Jim Henson Legacy. He was Jim’s lawyer and in 1972 joined the staff as general counsel and head of business affairs. Over the years, Al helped establish a legal and business philosophy that reflected Jim’s personal philosophy and endures today. He continues to work with the Henson Family and The Jim Henson Legacy on a variety of projects. Al recently shared his memories of his first experiences with Jim:

I don’t remember the first day that I actually met Jim, but I am convinced of a few things about that meeting. It took place early in 1970 in the Henson Associates two-story offices in a carriage house above an Italian restaurant on East 67th Street in New York City. I was accompanied by a lawyer colleague to meet with Jim and his production associate Diana Birkenfield to start my legal work on behalf of the company.

I had never before been in such a remarkable place. On the lower floor was the pure fantasy of the company’s workshop with its several designers and builders (one who looked like Santa Claus) surrounded by colorful costumes and puppets. I soon learned that these were hallowed premises that you did not enter unless you were invited. However, each time I passed them in the next few years, walking up the carriage house stairs, I’d steal a look, which always made me feel good and reminded me that I was in a very special place.

On the next floor there was a small conference room with the lowest conference room table and chairs that I had ever seen, surrounded by three small offices. It was in this setting that I met Jim Henson for the first time. He was tall and thin, with a carefully maintained beard, in slacks and a long-sleeved casual but beautifully designed shirt. I soon learned that this was his customary office attire. I don’t recall specifically what we discussed at that first meeting, but I am sure it had something to do with a contract or two, likely related to Sesame Street or The Great Santa Clause Switch.

I knew pretty much then or shortly afterwards that I wanted to work with this man. I could sense his essential decency and his desire to produce, with his puppets, only, engaging, meaningful and quality entertainment. And I was right.

Fortunately, in March 1972, I joined the company and its then about 12 employees as its general counsel and head of business affairs and went on to experience and enjoy its well-deserved worldwide success. 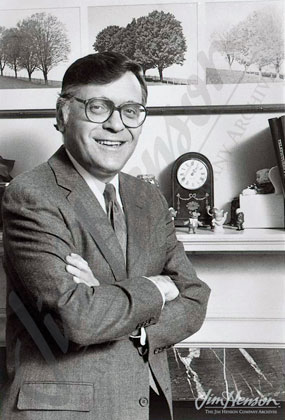 Al Gottesman in his office at The Jim Henson Company in the 1980s.