At the start of his career, Jim was known for his short, funny sketches and commercials. When Sam and Friends ended in 1961, he started to think about longer pieces. A fan of the work of Walt Disney, it’s not surprising that Jim looked toward traditional fairytales as source material. His first efforts in 1962 resulted in a half-hour television pilot called Tales of the Tinkerdee, featuring Kermit as a troubadour narrating stories in a fairytale setting. The show didn’t sell, but Jim continued to work with the characters he created for it and eventually developed three television specials under the banner Tales from Muppetland.

In these fractured fairytales, Hey Cinderella!, The Frog Prince and The Muppet Musicians of Bremen, Kermit both had dramatic duties and acted as narrator, and he appeared as a frog for the first time, trading his stubby feet and lizard-like designation for flippers and an amphibian identity. Hey Cinderella! came first, taped in Toronto in 1968, but it was in the second special with a theme focused on his species that Kermit’s frog-ness really solidified.

The Frog Prince, spiced with wisecracks and anachronisms and combining Muppets with live actors, featured the witch Taminella (the only character performed exclusively by the show’s writer Jerry Juhl) and the cigar-smoking King Rupert II (performed with glee by a gravel-voiced Jim Henson), both originally created for Tinkerdee. Kermit and a group of frogs were joined by a new frog character Robin (performed with charm and sweetness by Jerry Nelson) who sang a memorable duet with the large and hairy Sweetums, also conceived for the special.

Through The Tales from Muppetland specials, Jim learned a lot about putting his own shows on national and international (these specials also aired in Canada) commercial television. With R.J. Reynolds Foods as the sponsor, Jim got the full power of a big publicity engine and saw what promotional tools were available to get the word out and attract viewers. Slick press kits were created, Sweetums made appearances in various television markets, and special printed promotional materials were circulated. It paid off – the combination of Jim’s characters, Jerry Juhl’s writing, performances of Jerry Nelson, Frank Oz, and the team, Joe Raposo’s music and the publicity from the sponsor led to great reviews and enthusiasm for a third special the following year. 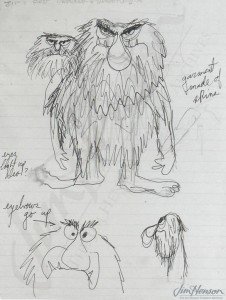 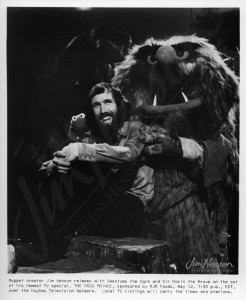 Publicity photo for The Frog Prince. 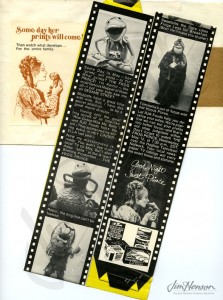 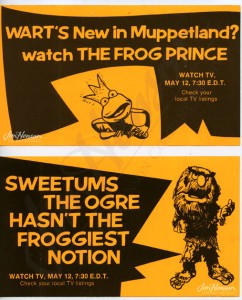 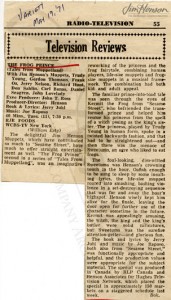