When Jim entered the University of Maryland in September 1954, he was already performing his puppets on local television, sometimes partnering with his friend Russell Wall. His first experience was on the short-lived Junior Morning Show which aired on WTOP, Washington’s local CBS affiliate, for just a few weeks that June. Later in the summer, Jim moved his talents to the NBC affiliate, WRC and began doing his act on a variety of shows. As the school year began in September, Jim enrolled in a puppetry class and met his next performing partner and soon-to-be life partner Jane Nebel.

According to the course catalogue, four times a week, Jim and Jane met for “the making of marionettes and the production of simple puppet shows”. As an art education major, Jane was required to take the course. Despite being a graphic design major, the course was, for obvious reasons, also of interest to Jim. Most of the class members were like Jane, seniors fulfilling requirements, but according to her and the professor, Edward Longley, the freshman Jim was the star and practically taught the course.

The intensity of the class gave Jim an opportunity to assess the talent around him and he quickly saw that Jane had a lot to offer as a performer and artist. In February 1955, he invited her to start working with him and on March 7, 1955, they began performing as part of WRC’s Afternoon show. With their success there, Jim was given his own daily five-minute show, Sam and Friends, which went on the air May 9, 1955. Though a short program, many hours went into planning, rehearsing, and making puppets. Jim brought in his friend Bob Payne to help out and the show became a popular entertainment for Washington viewers. It wasn’t until after Jim took a trip to Europe in 1958, literally leaving Sam and Friends in Jane and Bob’s hands for a couple of months, that Jim and Jane became romantically involved. They were married on May 28, 1959 and their first child (of five), Lisa, was born a year later. 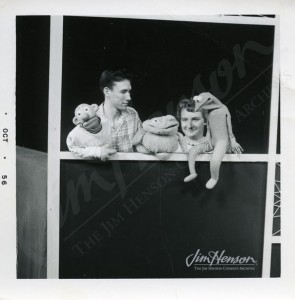 Jim and Jane Nebel with Sam and Friends puppets, 1956. 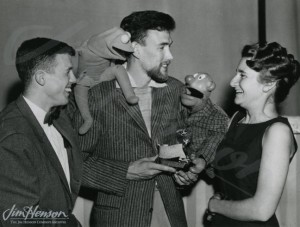 Bob Payne, Jim, and Jane Nebel (and Kermit and Sam) with their local Emmy award, 1959. Photo by Reni. 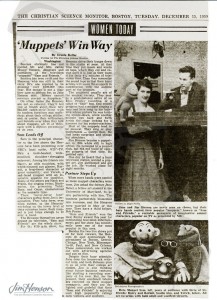 Jim and Jane featured in The Christian Science Monitor, December 15, 1959. 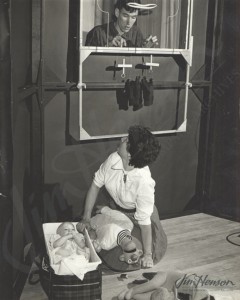 Jim, Jane and infant Lisa behind the scenes, 1960. Photo by Del Ankers.