While Jim Henson started working with puppets as a means to get into television, he soon realized the tremendous opportunities afforded by puppetry; it enables “an individual to do entire theater – that is, act, direct, produce, stage design, write, the whole thing,” he said in 1969. He was intrigued by all forms of puppetry from around the world and was eager to learn the techniques of other puppeteers. Jim produced several television programs celebrating puppeteers and their craft, the first of which was The Muppets on Puppets, produced in 1968 at public television station WITF-TV in Hershey, Pennsylvania, for National Educational Television (the precursor to PBS). It aired on New York’s WNET in January 1970.

In The Muppets on Puppets, Jim Henson, with the help of Rowlf the Dog, Jerry Juhl, Frank Oz, and Don Sahlin, explains the art of puppetry from building to performance, including a brief history and demonstrations of puppets of all types. The show provides a behind-the-scenes look at how the Muppets work and teaches how to make simple puppets at home. It also offers a wonderful opportunity to watch a young Jim Henson at work, with his equally young creative team. The Muppets on Puppets won the National Education Television award for Best Educational Television Show of 1968. In early 1969, Jim taped three additional shows at WITF in Hershey with Don, Frank and Danny Seagren. These were in color and aired on various public stations.

Jim clearly felt that these shows worked well and, in 1970, after a positive response to the wider airings of The Muppets on Puppets, he began to promote the idea of a similar show for commercial television. He worked up a budget and wrote a treatment for a special called The World of The Muppets which he pitched to potential sponsor General Foods. Complications arose relating to his existing relationship with R.J. Reynolds, sponsor of the Tales from Muppetland specials, and also due to Jim’s refusal to use his characters in commercials for unhealthy foods aimed at children. This came out of his commitment to Sesame Street, then in its first season, and Jim’s desire not to use the power of television to manipulate young viewers.

Iowa Public Television aired the later shows and has posted one here. 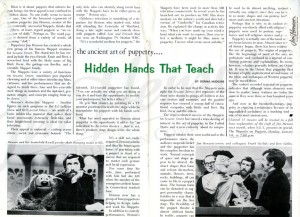