The late 1980’s were a busy and exciting time for Jim. He had his hand in a number of projects including The Jim Henson Hour and The Storyteller. When January of 1988 rolled around Jim had succeeded in selling The Witches to Lorimar Film Entertainment with himself serving as Executive Producer. Jim was eager to establish a new balance between actor and animatronics, a goal he strived to achieve with past projects such as Labyrinth. Development meetings took place immediately and at one particular meeting on January 26, 1988, Bernie Brillstein, Jim’s manager and friend, suggested filming two endings, one that followed the original ending from Roald Dahl’s book in which the boy, named Luke in the film, remains a mouse, or the alternative with Luke being changed back into a boy.

There were concerns about which ending to use, but Jim thought it best to allow an audience to decide. A number of test screenings took place from October 1988 to May of 1989 in London and in Los Angeles. During these screenings, alternative endings were tested on the audience and segments that were deemed too frightening were shortened, changed or removed. At the November screening, some children found it to be too scary, gross or disgusting. By May, the reactions changed drastically. The alternative ending with Luke transforming back into a boy won out among the audience. One viewer even described the ending as “the best since American Tale.” The removal of scenes considered too terrifying combined with the happier of the two endings allowed the audience to enjoy the story and special effects. Children eight years and over were still concerned about the younger crowd’s fright level, but overall found the film to be a “great fantasy and adventure.” 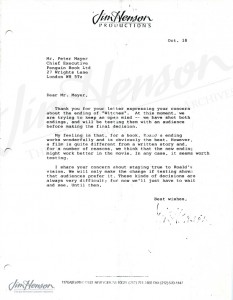 Jim’s letter to Penguin Book Ltd regarding the ending for The Witches, 1988. 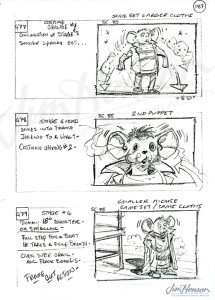 Storyboard from The Witches featuring the Creature Shop’s transformation process from boy to mouse, 1988. 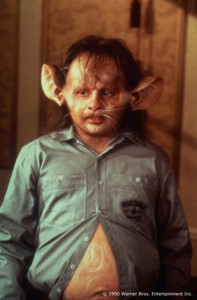 Bruno Jenkins (played by Charlie Potter) in a publicity still from The Witches, 1990.