The Swedish Chef is no doubt one of Jim Henson’s wackiest characters – silliness personified, a Muppet with license to do the ridiculous for the sheer joy of it. Jerry Juhl, head writer for the Muppets, described him best: “The Swedish Chef was Jim at his most supremely goofy. There’s no bottom to the complete goofiness and lunacy of this character… he makes no sense at all. He’s just very funny… and Jim adored doing him.” Describing Jim performing the head while Frank Oz did the hands, Jerry continued, “Jim and Frank… would so often fall apart into such helpless hysterics because the pieces of material for the Swedish Chef were of course always designed just to invite every kind of disaster you can imagine.”

In the mid-1980s, Jim decided to create a Swedish Chef themed breakfast cereal parody. Potential names included Oople-Sauceys, Croonchy Poofs, Moopettes, and the favorite (among the Henson people, not the manufacturer) Stoopid Flakes. With major contributions from art director Michael Frith, the idea evolved into a real product from Post Cereal called Croonchy Stars which landed in grocery stores in late 1988. The commercial shoot in 1987 was for the earlier Stoopid Flakes version of the cereal, and a new commercial was taped for the final version the following spring. 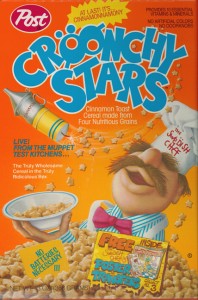 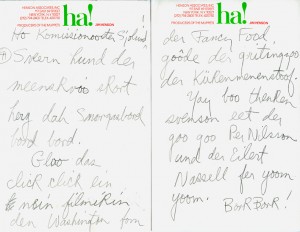 Jim’s draft of a letter from The Swedish Chef to the Swedish Trade Office in response to their request for his appearance at the 1983 International Fancy Food and Confection Show in Washington. 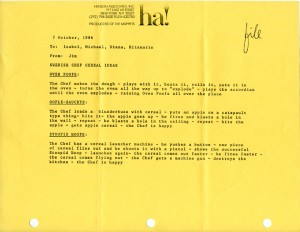