The sale of the Hensons’ house on Round Hill Road in Greenwich, CT marked a move to nearby Bedford, NY. Those eight years in Greenwich, starting in 1964, were productive and formative ones busy with Jim’s work in commercials, on experimental films, on variety shows, and on the development of Sesame Street. Two Henson children were born during those years, John and Heather, and the family enjoyed art projects, romps in the woods, school puppet performances, and visits from family and friends.

The Greenwich house had an impressive pedigree – once the home of American impressionist painter, John H. Twachtman, it was later remodeled by architect Stanford White. Jim and Jane Henson added their own creative mark, designing and installing whimsical tile work in a bathroom and adding decorative paint to built-in fixtures; both remain in the house today. 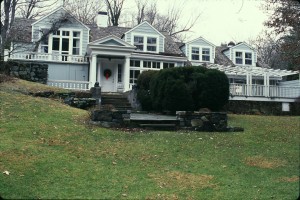 The Henson’s house in Greenwich, CT. Photo by Richard Termine. 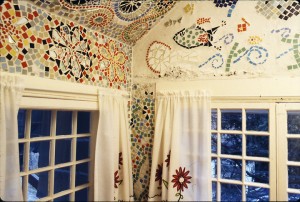 Tilework by Jim Henson in the bathroom of the Henson’s house in Greenwich, CT. Photo by Richard Termine.

Run, Run, a short film made by Jim Henson and Frank Oz in 1965 with music by Joe Raposo.