Hired in 1965 by the Campbell-Mithun Advertising Agency on behalf of the Beatrice Foods Company, Jim made seven commercials featuring the hand-puppet version of his character, Delbert the La Choy Dragon. To demonstrate the slogan “Quick cooked in dragon fire,” the puppet blew real flames across neatly displayed cans of La Choy Chow Mein on the set at Rodel Studios in Washington, DC.

In 1966, Jim redesigned the puppet to show the complete character – not just the upper half. This was the first full-body puppet made by Jim and served as a blueprint for Sesame Street’s Big Bird. Jim made four more commercials with the full-body character, taking advantage of the slap-stick possibilities presented by the dragon’s size and ability to move around the set. Jim continued to do the voice, but he put young performer Frank Oz inside the puppet. For the next La Choy sales meeting, however, Jim proudly performed the puppet himself live to rave reviews. 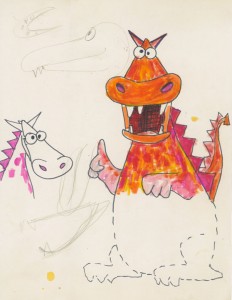 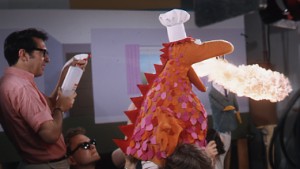 On the set of a La Choy Chow Mein commercial in 1966, Don Sahlin (far left) and Jerry Juhl (in sunglasses) create the pyrotechnics.