In 1979, Henson Associates created an exhibit for the Performing Arts Library at Lincoln Center called “The Art of The Muppets”.  Designed by Henson staffer, Mari Kaestle, the exhibit showcased Jim’s creations, featuring photos, puppets, and video footage.  It was such a success that a touring version was created. Starting at The San Diego Museum of Art, it toured to twenty additional cities, finishing the tour at London’s Museum of the Moving Image in 1988.

Jim’s journal entry on October 21, 1985 refers to his trip out to see “The Art of The Muppets” at the Children’s Museum of Indianapolis. During a three month period, over 100,000 came to see the show there. One of the popular features was the “touch wall” – a wall covered with fur and foam so that visitors could feel the actual materials that went into making the characters. Other features included an audio tour with Kermit the Frog and a model showing how Kermit and Miss Piggy managed to ride bicycles. That part was narrated by Jim – he gave the basic information about combining tow, radio control and hand puppets, but when pressed to tell how they rode in circles, Jim said, “That is so complicated, you’ll have to figure it out for yourself.” 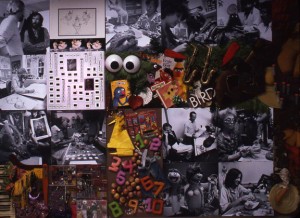 Display from The Art of The Muppets exhibit showing behind the scenes of creating a character. 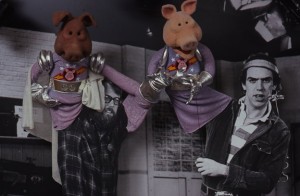 Puppets from Pigs in Space displayed on cut-outs of puppeteers Dave Goelz and Richard Hunt in The Art of The Muppets exhibit.