The Muppets’ appearance on Flip Wilson’s show was one of dozens of television guest spots on shows across the television dial. These appearances were opportunities for Jim to showcase the newest comedy bits and characters in his repertoire, so it was no surprise that Big Bird was featured on Wilson’s show. Not quite a year after the debut of Sesame Street, Big Bird was already a big (8 foot 2 inch) celebrity and audiences clamored for him. His feathered face even appeared on the cover of Time magazine that November.

The October 15th appearance was a return engagement – Big Bird and Oscar the Grouch had appeared the month before for the NBC premiere of The Flip Wilson Show. Jim, Big Bird’s performer Caroll Spinney, and puppet builder Kermit Love traveled to Los Angeles that August for both tapings. On this second show, Big Bird was joined by Loretta Long (Susan of Sesame Street), actor Raymond Burr, comedian Stanley Myron Handleman and the teen pop group Sunday’s Child. Big Bird danced and talked with Flip and the other guests. The whole gang sang the Sesame Street theme and The Counting Song, Oscar the Grouch made a cameo, and the show ended with Big Bird’s hit, The Alphabet Song. 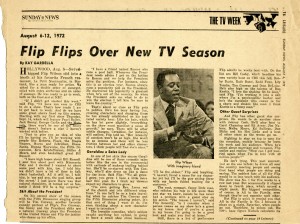 Preview article about the NBC premiere of The Flip Wilson Show featuring The Muppets. 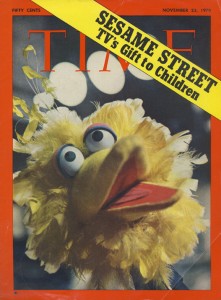