The formation of Children’s Television Workshop (CTW) in 1968 marked the start of development for a revolutionary educational television show – Sesame Street. Within a year, the creative team was assembled, the setting was established, the humans were cast, and Jim Henson had designed a company of puppets to populate the street. Everyone involved recognized the power of television and wanted to harness it to help educate children. As Jim once noted, “Kids are going to watch television anyhow – why not put something on television that’s good for them?”

The hour-long show, forty years later, has been updated but still consists of a storyline taking place on the street, short films to teach numbers, letters and other concepts, and Muppet inserts. The inserts, which were designed to be part of any episode rather than connected to a particular storyline, have some sort of educational message and are heavy on entertainment value. They often include a musical number and are always sure to draw laughs. By the time the storyline for the Sesame Street’s premiere episode was taped on October 21, 1969, production was well underway on the short letter and number films and the Muppet inserts.

Kermit appeared regularly in inserts, but it was the personalities of Bert and Ernie that really emerged in these bits. Jim Henson’s designs, transformed into puppets by Don Sahlin, set the tone with opposing shapes, colors and stripe direction. Whether it was Ernie in his bathtub or Bert with his paperclips, these characters, preformed by Jim Henson and Frank Oz and directed by Jon Stone, developed as a comedy team and as a best-friend relationship that mirrored that of the puppeteers. 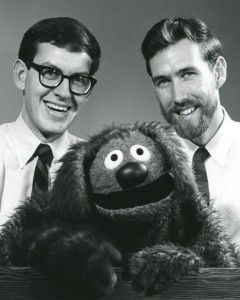 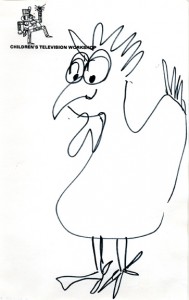