Throughout the 1960s, Jim and his team performed their act on numerous variety and talk shows. September 26, 1969 marked their tenth appearance on The Tonight Show, hosted then by Johnny Carson. Working with Frank Oz, Don Sahlin and Danny Seagren, Jim did two very different bits that night with classic Muppet endings. In “Glowworm”, Kermit tries to eat a worm but instead gets eaten himself when the worm turns out to be the very long nose of a monster called Big V. “Sclrap Flyap”, an abstract piece featuring three alien-like creatures in a smoky, extra-terrestrial landscape, ends when the littlest creature, who only says “Merp”, blows away the largest one with a large puff of smoke.

As part of a repertory of pieces Jim began developing back in the late 1950s, both “Glowworm” and “Sclrap Flyap” had been performed the previous year on The Ed Sullivan Show. Jim did versions of both bits on other shows and ultimately adapted them for The Muppet Show. The Muppets did another five appearances on The Tonight Show, and, on April 2, 1979, Kermit sat in for Johnny Carson as probably the only non-human guest host in the show’s history. 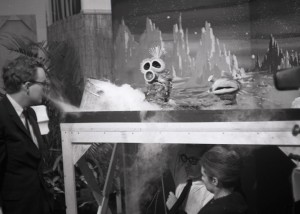