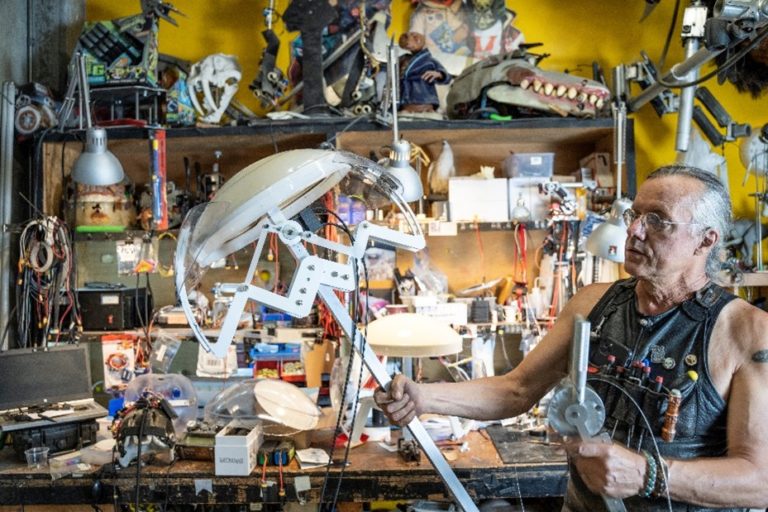 The puppets, designed by international award-winning puppeteer Basil Twist (Symphonie Fantastique) are currently being built at the LA location of Jim Henson’s Creature Shop, the legendary workshop of The Jim Henson Company. The Shop has an iconic history, producing some of the world’s best loved characters from The Muppet Show, Fraggle Rock, The Dark Crystal, Labyrinth and Sesame Street.

Mervyn Millar, director of Significant Object (War Horse) who designed the puppetry for the RSC’s recent acclaimed production of The Magician’s Elephant, will create additional puppets in their UK based workshop.

“I feel an immense responsibility to bring the iconic characters of My Neighbour Totoro to life on stage. I want to honour these characters and capture the enchanting mystery of this beloved story. I want audiences to be inspired by the same feeling they get from the film when they meet Totoro on stage, so I chose to bring in the team at Jim Henson’s Creature Shop to make sure we got it right.

The Jim Henson Company is synonymous with imagination and childhood. I have been building puppets since I was a young boy, and to me there is still nothing more magical than when a seemingly inanimate object comes to life before your eyes. I have worked with the team at the Shop over the course of my career, so when I accepted this challenge and needed a team who could build my designs and bring Studio Ghibli’s treasured characters to life, I knew it had to be Henson. I truly believe we are creating something extraordinary.”

“We know all too well the importance of maintaining the visual style and personality of beloved characters. Whether an audience member is a long-time fan of this iconic story, or new to Miyazaki’s fantastical world, they will be simply amazed when they see these magical creatures live on stage in a whole new way in My Neighbour Totoro.”

Performed on the Barbican’s iconic stage, My Neighbour Totoro will play a 15-week season from Saturday 8 October 2022 to Saturday 21 January 2023 with press night on Tuesday 18 October 2022.

The celebrated 1988 animated feature film by Hayao Miyazaki (Spirited Away) will be brought to the stage by its original composer Joe Hisaishi in a landmark new adaptation by the RSC (Matilda The Musical) written by playwright Tom Morton-Smith (Oppenheimer) in collaboration with Improbable and Nippon TV.

The production is supported by Spanish Luxury House LOEWE, the Headline Sponsor of My Neighbour Totoro, whose connection with Studio Ghibli began in 2021 with the creation of a capsule collection inspired by the original animated film.

Directed by Phelim McDermott with production design by Tom Pye, costumes by Kimie Nakano, lighting by Jessica Hung Han Yun, and movement by You-Ri Yamanaka, the production will feature puppetry created by Basil Twist and music from Joe Hisaishi’s iconic score in a new orchestration by Will Stuart, performed live with sound design by Tony Gayle. Associate Director is Ailin Conant. Artwork for the stage adaptation of My Neighbour Totoro includes a hand drawn title by Toshio Suzuki, Producer for Studio Ghibli, who was involved in the planning and production of the original animated film. Casting for the production to be announced soon.

This enchanting coming-of-age story explores the magical fantasy world of childhood and the transformative power of imagination, as it follows one extraordinary summer in the lives of sisters Satsuki and Mei.

In order to be closer to their mother while she recovers from an illness in a rural convalescent hospital, their father moves the family to the countryside. As the girls explore their beautiful new surroundings, Mei encounters magical creatures and the ancient protector of the forest she calls Totoro.

Although Satsuki doesn’t believe her little sister at first, they are soon both swept up in exciting adventures with their new neighbours – transported to a long-forgotten realm of spirits, sprites, and natural wonder.