Worldwide Fans are Invited to A Two-Day Convention, plus a VIP Party on the historic Jim Henson Company lot, and Insiders Tour of Jim Henson’s Creature Shop

The First Official Dark Crystal Event of its Kind in The U.S., Packed with Puppets, Puppeteers, Panels and Surprises Galore! 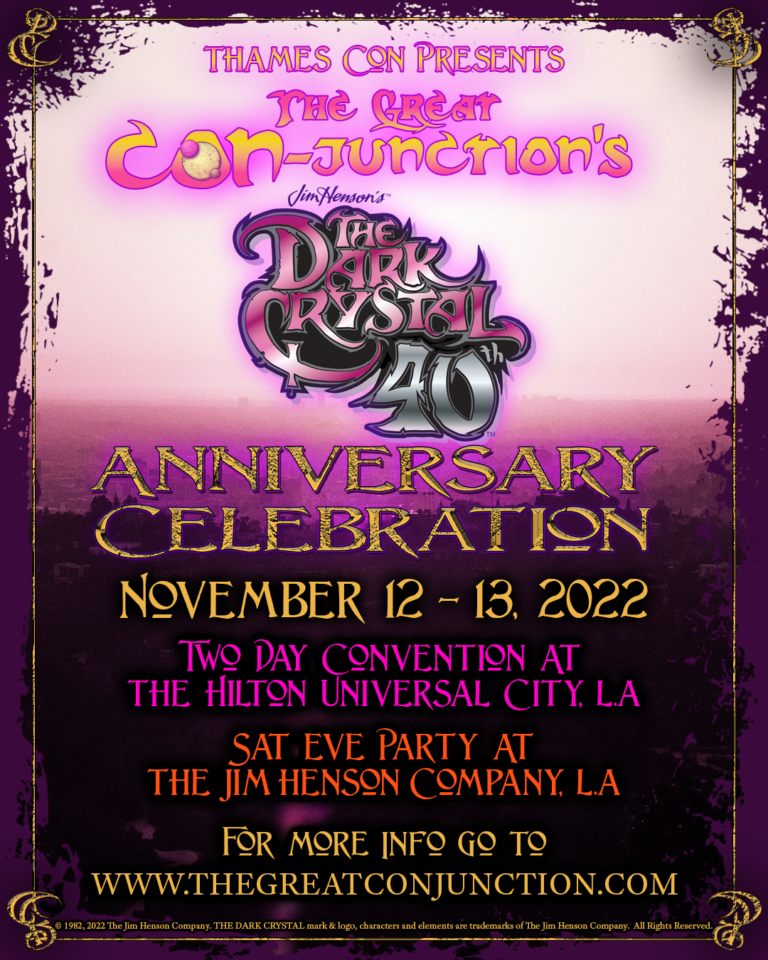 Hollywood, CA (August 10, 2022) – Thames Con welcomes all fans of Jim Henson’s fantasy classic The Dark Crystal to the Hilton Universal City for a fantasy-filled weekend on November 12-13, 2022, in celebration of the 40th anniversary of the cult-classic film. Tickets are available now on the Great Con-Junction website by clicking [here].

Fans that purchase a ‘Skeksis’ or ‘Mystic’ Pass will be able to attend a VIP party on the historic Jim Henson Company lot in Hollywood, where they can enjoy performances and music whilst mingling with special guests. A ‘Thra’ or ‘Aughra’ pass also includes an intimate tour of the lot during the party, and a separately scheduled visit to the award-winning Jim Henson’s Creature Shop.

Zay Mirmalek, CEO of Thames Con, organiser of the first ‘The Great Con-Junction’ held in the U.K. in 2020, promises fans from around the world that the convention at Hilton Universal City will be “larger and more extravagant”, hosting a plethora of special guests involved in the production of the film and Netflix prequel series, and boasting panels, workshops, portfolio reviews, puppets, props, merchandise and more. The event will also include a cosplay competition with special guest judges including Toby Froud, Senior Costume and Creature Supervisor on The Dark Crystal: Age of Resistance.

Mirmalek adds “Jim acknowledged that The Dark Crystal was his ‘proudest achievement’ and that his hope was to ‘leave the world a little better’ for having been here. With The Great Con-Junction, we want to commemorate his achievement and celebrate how many fans he has impacted across the world.”

The Dark Crystal, released in theatres in the U.S. on December 17, 1982, follows two young Gelfling on a journey to heal the Dark Crystal and, in turn, reunite the selfish Skeksis and gentle Mystics. It was hailed as the first live action, feature-length film in which no human actor appeared and received critical acclaim. Kevin Thomas of the LA Times appreciated its fantasy presentation, stating “The Dark Crystal casts its spell from its very first frames…You’re left with the feeling that you have just awakened from a dream.” And Colin Greenward of Imagine magazine praised its craftsmanship, stating, “The Dark Crystal is a technical masterpiece with splendid special effects.” Through extensive home distribution over the years, the film went on to achieve cult status, with fervent fan interest spurring on the release of novels, comics and merchandise, culminating in the epic Netflix series The Dark Crystal: Age of Resistance, released worldwide over thirty years later, on August 30, 2019. A prequel to the feature film, it portrayed the origins of the Dark Crystal’s corruption and the Gelfing uprising to overthrow their Skeksis lords in a bid to save their race from extinction. Winner of the Emmy award for Outstanding Children’s Programme and the Visual Effects Society award for Outstanding Special (Practical) Effects in a Photoreal or Animated Project, the series has reignited fans of Jim Henson’s mystical world of Thra and its fantastical inhabitants.

Founded in 2017, Thames Con is an independent events management company based in Oxford, U.K., and organiser of the first ‘The Great Conjunction’ held at Elstree Studios, London in 2020. It sets itself apart by working closely with its partners, judiciously selecting locations and attractions that are embedded in the DNA of the intellectual property Thames Con events celebrate, to provide authentic and unforgettable experiences for fans. Following the success of ‘The Great Con-Junction’ the company aims to continue its successful venture into the beloved franchises of our collective childhoods, promoting and reigniting passionate fans around the world.

The Jim Henson Company has remained a leader in family entertainment for over 60 years and is recognized as an innovator in puppetry, animatronics, and digital animation. Henson’s most recent television credits include Fraggle Rock: Back to the Rock, Harriet the Spy and Fraggle Rock: Rock On!, all for Apple TV+, Earth to Ned for Disney+, and the Emmy Award-winning Netflix Original series The Dark Crystal: Age of Resistance. The Company is currently in production on Guillermo Del Toro’s Pinocchio for Netflix and the feature film The Portable Door.