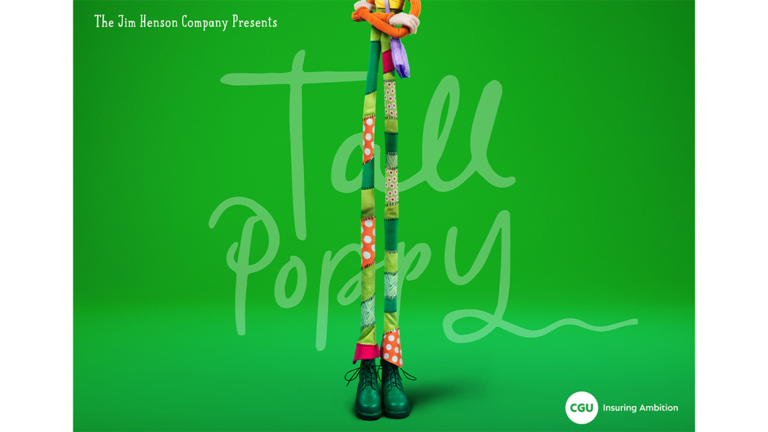 CGU Insurance has collaborated with The Jim Henson Company to break down the cultural phenomenon of Australia’s tall poppy syndrome with the ambitious new production Tall Poppy, released nationally in Australia today.

Poppy, developed by CGU Insurance and brought to life by the award-winning Jim Henson’s Creature Shop, encourages Australians to question the cultural stigma of tall poppy syndrome, and to see ambition – which is often seen as a negative trait – in a different light. Poppy is a heroine for the positive power of ambition, which can lead to creativity and innovation, and on her journey, she learns to hold onto and share her ambitious spirit.

Tall Poppy was created using an impressive range of production techniques and technologies, combining classic tabletop puppetry with rich visual effects resulting in a hand-crafted yet sophisticated look. Dozens of puppets and nearly 150 visual effects shots were needed to complete the nine-minute film.

Brian Henson said: “Tall Poppy is about celebrating ambition, and facing the feelings of uncertainty and vulnerability that can get in the way of living to your fullest potential. The ambitious team that came together to create this film, brought together by our incredible partners at CGU Insurance, definitely saw the magic and innovation that can happen when everyone feels free to share their own unique talents. We hope that Poppy’s story will inspire Australians to celebrate their own tall poppies.”

According to recent research* conducted by CGU Insurance, more than a third of Australians believe ambition is often regarded as a dirty word.

The same research revealed that almost 60% of people believe Australians like to cut down ambitious people, despite the positive role ambition can play in our lives. However, the seeds for change are evident with 77% of Australians acknowledging that ambition is important to drive progress and innovative thinking.

IAG Chief Marketing Officer Brent Smart, said: “CGU Insurance created Poppy to highlight that being ambitious is a good thing. We want to celebrate Australia’s tall poppies, not cut them down, because collectively driving innovation in small businesses is essential for progress and growth.”

“Celebrating and inspiring ambition in the next generation of Australians is important, and we shouldn’t let the tall poppy label or the issue of standing out due to our success hold us back. As seen with Poppy’s story, ambition can lead us to achieve wonderful things,” said Mr. Smart

*The CGU Insurance YouGov study was conducted online between 9-13 December 2021. The sample comprised a nationally representative sample of 1,055 Australians aged 18 years and older.

About CGU Insurance
CGU is a leading business, rural and personal insurance company and a top-three provider of workers compensation insurance.

CGU distributes an extensive range of market-leading products, and each year delivers their customers the insurance protection for more than 125,000 businesses, over 60,000 farms and hobby farms, nearly half a million properties and over one million motor vehicles.

CGU is proudly backed by IAG, the largest general insurer in Australia and New Zealand. CGU is proud of its 165-year history of supporting customers in a time of need.

About The Jim Henson Company
The award-winning Jim Henson Company has remained an established leader in family entertainment for over 60 years and is recognized as an innovator in puppetry, animatronics, and digital animation. Best known as creators of the world-famous Muppets, Henson is currently in production on Guillermo Del Toro’s Pinocchio for Netflix and the feature film The Portable Door. Henson’s most recent television credits include the acclaimed reboot Fraggle Rock: Back to the Rock and the animated series Harriet the Spy, both for Apple TV+, as well as Duff’s Happy Fun Bake Time for discovery+, Earth to Ned for Disney+, Fraggle Rock: Rock On! for Apple TV+, the Emmy-winning Netflix Original series The Dark Crystal: Age of Resistance, Word Party (Netflix) and the Emmy®-nominated Dinosaur Train (PBS). Previous TV productions include Sid the Science Kid (PBS), Splash and Bubbles (PBS), and Julie’s Greenroom (Netflix), as well as Fraggle Rock, The Storyteller, and the sci-fi series Farscape. Feature film credits include The Star (Sony Pictures Animation), Alexander and the Terrible, Horrible, No Good, Very Bad Day (Disney), and the ground-breaking fantasy classics The Dark Crystal, and Labyrinth.

With additional locations in New York and London, The Jim Henson Company is headquartered in Los Angeles on the historic Charlie Chaplin lot, complete with soundstage and post-production facilities. The Company is home to Jim Henson’s Creature Shop™, a pre-eminent character-building and visual effects group with international film, television, theme park and advertising clients, as well as Henson Recording Studios, one of the music industry’s top recording facilities known for its world-class blend of state-of-the-art and vintage equipment. The Company’s Henson Alternative credits include The Curious Creations of Christine McConnell (Netflix), the feature film The Happytime Murders and the popular live puppet improvisational show Puppet-Up! – Uncensored.